I’ve learned to never say I won’t write something. I used to say I’ll never write romance. Now, most of my books have a romantic subplot. I didn’t used to be a fan of epic fantasy. Now, I’m writing an epic dark fantasy series. Didn’t plan on it. My Merging Worlds series kept growing. Now, in book 4, the cast is large and the characters are traveling to different overseas lands.

But, this presents a bit of problem.

Let’s go back to the story of Book 4 and how it came about. My Merging Worlds series started out as standalone books. I had no intention of ever writing a series. One day, I realized that these standalone stories all happen in the same world.

Book 4 began as a short story that took place in a world where Darkness and Silence are alive. People need light or sound all the time or they’d get attacked. I did not want to turn that story into a novel because I knew the world-building would be a nightmare.

A big cast going on a dark adventure in a big fantasy world. How can one author manage that?

I can hear all the pansters groaning. I’m a panster. I don’t do outlines. I don’t do in-depth planning. But, if you’re writing an epic dark fantasy story, you need to do some kind of planning.

What kind of planning depends on you. I’m mapping out time passing for each character, their travel itinerary and general arc for major characters.

I’ve been using Evernote for years. It’s free. I can use it on the Desktop or phone. And, it lets me save any articles I find while researching. That’s particularly useful for this story. The characters don’t see a lot of sunlight and I need to research the effects of that.

Also part of the planning but deserves a separate section. This helps immensely, even if you’re doing just a rough sketch. When you have a lot of locations, it’s hard to keep them straight in your head. I’d also suggest, if your story spans several landmasses, to do a world map.

Also, write down how long it would take to get from one location to another.

Keep in mind, everyone in the world won’t speak the same language. You don’t have to create a new language but you might want to mention it.

One thing I’ve learned about world maps is that the landmasses should all be able to fit together. Kinda like Pangea.

Speaking of languages, in my WIP The Sciell ‘s Legacy, I’m not bothering with that too much in the first draft. I’ll develop it more in the second and third drafts.

I’m also not writing this story linearly as I’ve done with other books. One day, I might work on the Divine’s chapters. Another day, I could be developing Ren’s adventure. Some days, I’ll only work on describing a setting. I am not editing as I go. I’m mostly writing the chapters and scenes out of order.

Be Able to Reorder Chapters

I write in MS Word. While working on The Sciell’s Legacy, I discovered that if I turn the Chapter titles into a Heading Style, I can move sections around.

I love that I can do this. I write however I want then easily move the chapter to later or earlier in the story.

The Heading Style also makes it easier to navigate through my story. These chapter names aren’t going in the final version of my story. They make it easier to determine which chapter covers what since I’m writing out of order.

My cast is fairly large.

All these people do not get POV chapters. The story mostly focuses on three- Rayne, Elihona and Ren. Rayne and Elihona are traveling together and Ren has his own adventure.

I treat all the other characters as an intermission. When I’m switching from the Rayne/Elihona story to Ren’s, I’ll insert a Divine POV, for example. It’ll be two chapters from Elihona’s POV, 2 from Rayne, 1 from Divine then 3 from Ren.

Be Careful with Character Names

When researching on writing a large cast, I learned we shouldn’t give characters similar sounding names or ones that begin with the same letter.

On top of that, certain characters have two Mom and Dads- their birth parents and the marriage Mom and Dad. For those sections, I’m rely on context clues to tell which Mom and Dad they’re referring to.

I’ll mostly have to rely on editors and beta readers to tell whether or not I managed it right.

Use a Character Planner

I’ve started using Character Story Planner and I love it. I think it’s only available for Android devices, though. This app lets you go deep into character planning. Helps a lot when you don’t remember character appearances. It’s good when you get some inspiration on-the-go, which has happened to me.

In addition, I listed all my characters in Word, giving them a brief description. Years ago, another writer mentioned also including a character’s soul wound- an internal darkness they’re dealing with in the story. I loved the idea.

Be Ruthless When Editing

One thing I don’t like about some epic fantasy stories is that they’re long because they spend so much time on stuff that could be explained through dialogue or left out altogether. One book I started years ago had an interesting premise but it began with a chapter long exposition dump and I was not interested.

Epic dark fantasy books tend to be long. Book 3 of my Merging Worlds Series is about 150,000 words. Once I reached the final draft of Book 3: The Lost Sciell, I went through that book and deleted everything I didn’t think needed to be in there. I removed dialogue I enjoyed. Deleted entire chapters. If it didn’t move the story forward or made the story unnecessarily complicated, it got axed. Since I have so many characters, I removed the side ones that did little for the story.

Doesn’t matter how important you think the information is, if it doesn’t move the story forward, remove it.

You don’t have to delete those sections completely. I removed them from the story and put them in a deleted scenes document.

When writing an epic dark fantasy novel, planning is key. You have a lot of moving pieces. It’s difficult to keep everything straight. Find a way that works best for you. In the beginning, I printed all my notes and put them on a corkboard in my writing area. I bought a large poster board and drew my map on it and hung it on my wall.

I used to be a pantser, but I’m slowly moving closer to the planning side of the spectrum.

Wow, what a valuable article for writers with great details.
I enjoyed learning about all the apps you use, too.
Thank you, Auden.

SO much valuable information and great tips in this blog. I’ve never written a series before , but I agree – never say never!

I mentioned in the last post 2 Ways to Make Fantasy Maps in Photoshop, that I, as the title says, use Photoshop to make my fantasy maps. But, I am curious if there’s an easier Read more…

I got into making fantasy maps because I needed them for my books but, I couldn’t afford to hire a designer. That’s kinda been the case for most of my self-publishing journey. I would never Read more… 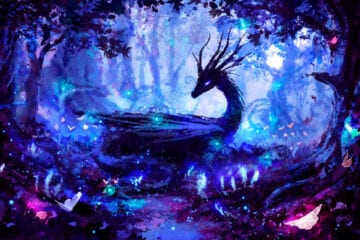 A Guide to Creating Fantasy Plants and Animals

You don’t have to reinvent the wheel when creating your fantasy plants and animals. I gave some inspirational ideas in the post World Building: Creating Fantasy Animals and Creatures. Add a city or town name Read more…