When the Sun Aligns: Manhattanhendge 2019

The setting sun aligns perfectly with the NY street a few times a year. If the sky’s clear, Manhattenhenge is a magical time to take some epic shots.

Saturday was not that day.

I learned about Manhattanhenge a couple of years ago when it was trending on Twitter. I’ve done it three times since then but I haven’t been able to recapture the magic of the first time. Either the weather didn’t line up or I wasn’t in a great spot.

This is probably one of the best photos I’ve taken of this lovely phenomenon, taken in 2016. This was my first Manhattanhenge. 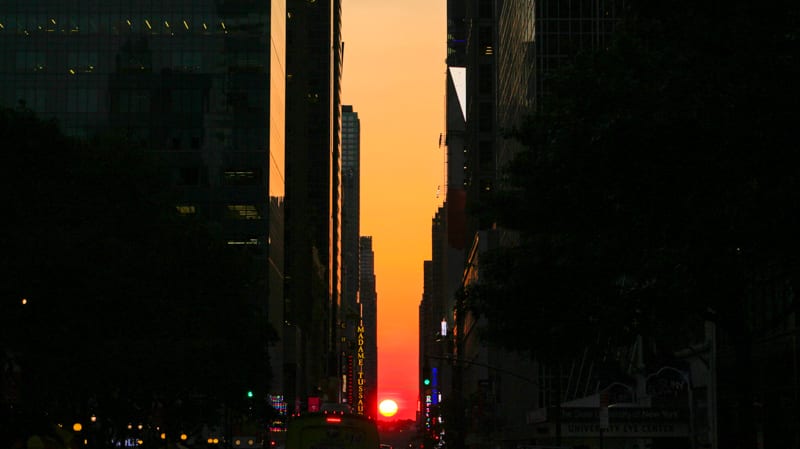 Here’s my fav from last years and it’s not even of the sun. 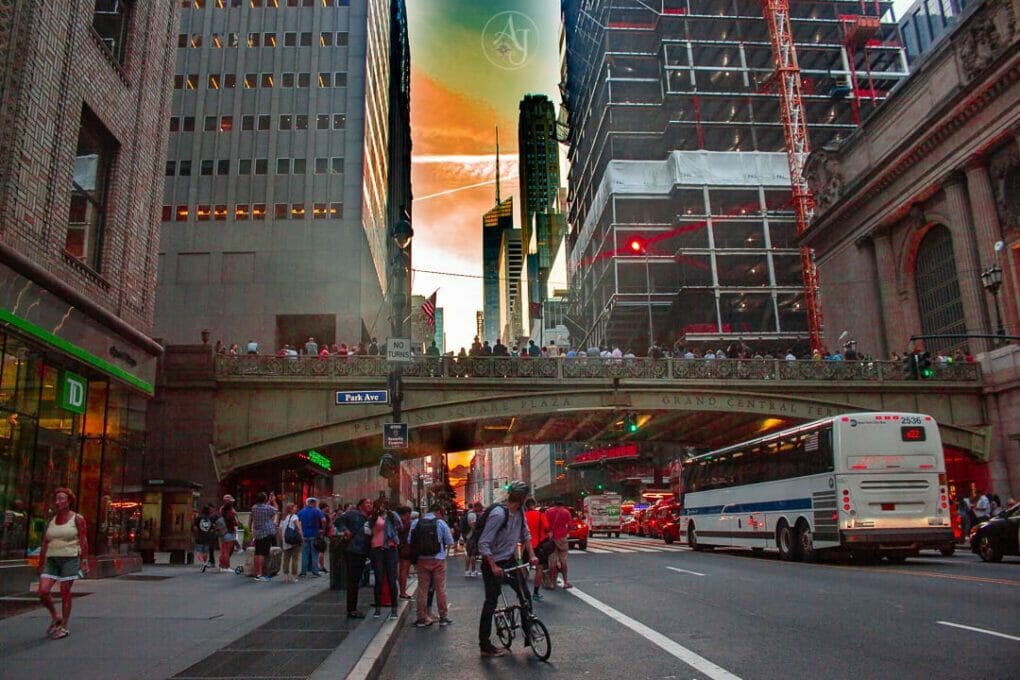 The sky has to be perfectly clear for this to work.

This year, I wanted to find a different perspective. I heard about a premium spot on the Tudor City bridge. You get the nice line in the street with the Crystal Building. @AnneLaBarbera on Twitter told me I’d have to arrive at 2 pm to get a good spot. Manhattanhenge doesn’t start until 8:21 pm.

But, I had nothing better to do and, if the shot worked, it would make the 6-hour wait, while standing, worth it.

I arrived a little late. My phone died while I was running errands in the morning, so I couldn’t leave the apartment until it charge.

I didn’t arrive until 3 and already, already, people took the premium spots. 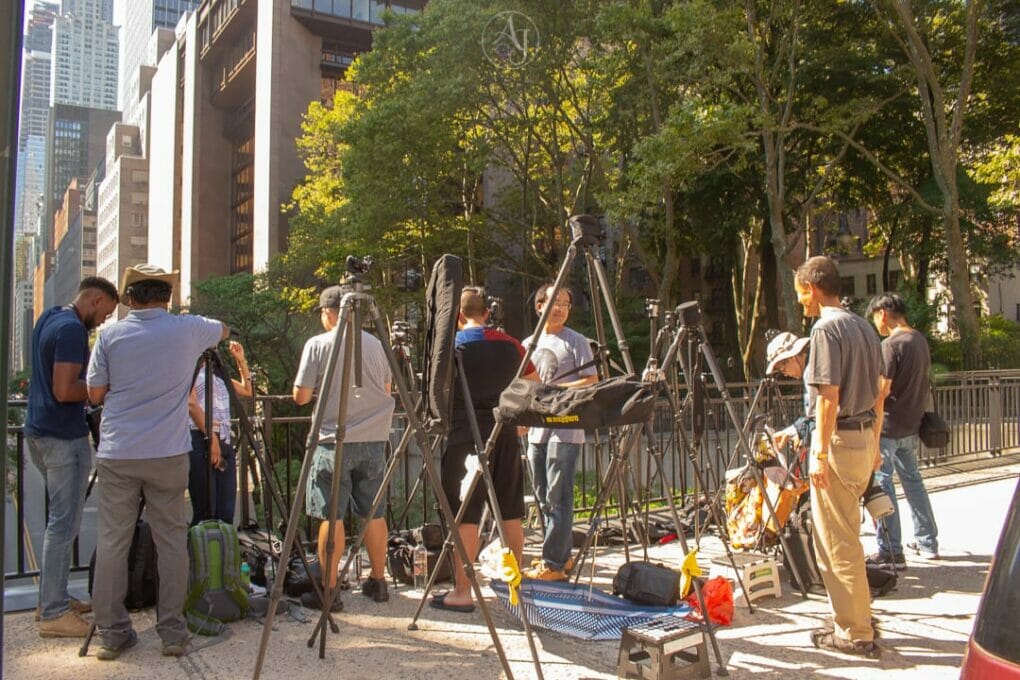 What I didn’t know…the bridge only has a small spot for taking good Manhattanhenge photos because the street beneath is lined with trees. 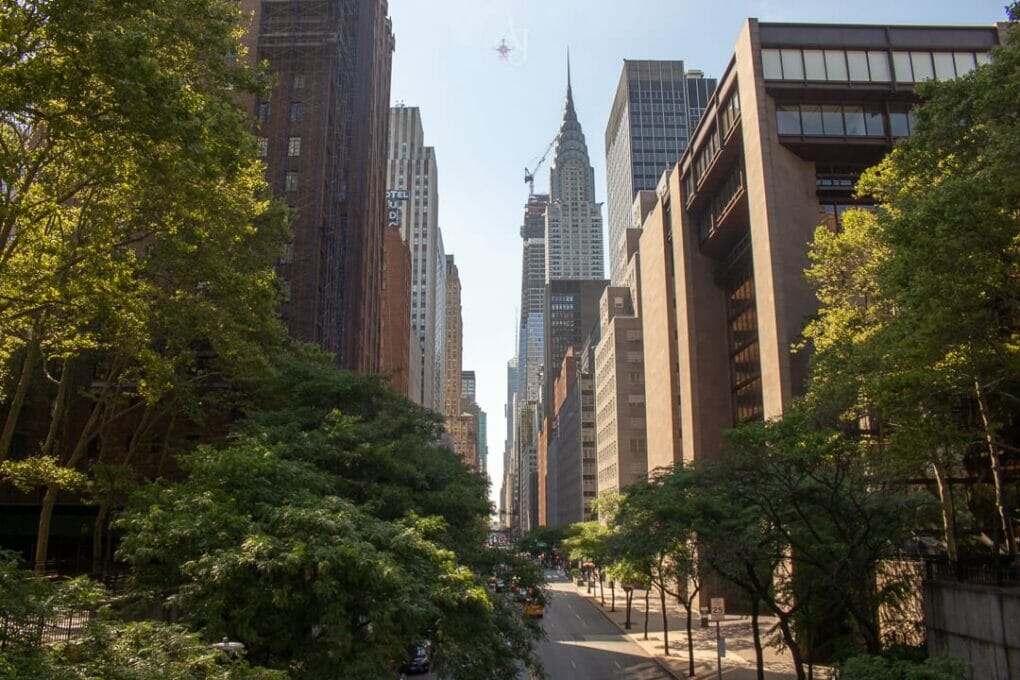 I love nature, I really do, but on that day, I wanted to take an ax to those trees. I managed to snag a decent enough spot but the trees…those trees.

And, it was close to 90 degrees with little shade, despite the trees close by. We were near the water so we had a little breeze but it was a hot wait. I sat against the rail and alternated between reading an ebook and playing with my camera.

I noticed a cool reflection on car windows as they passed underneath. 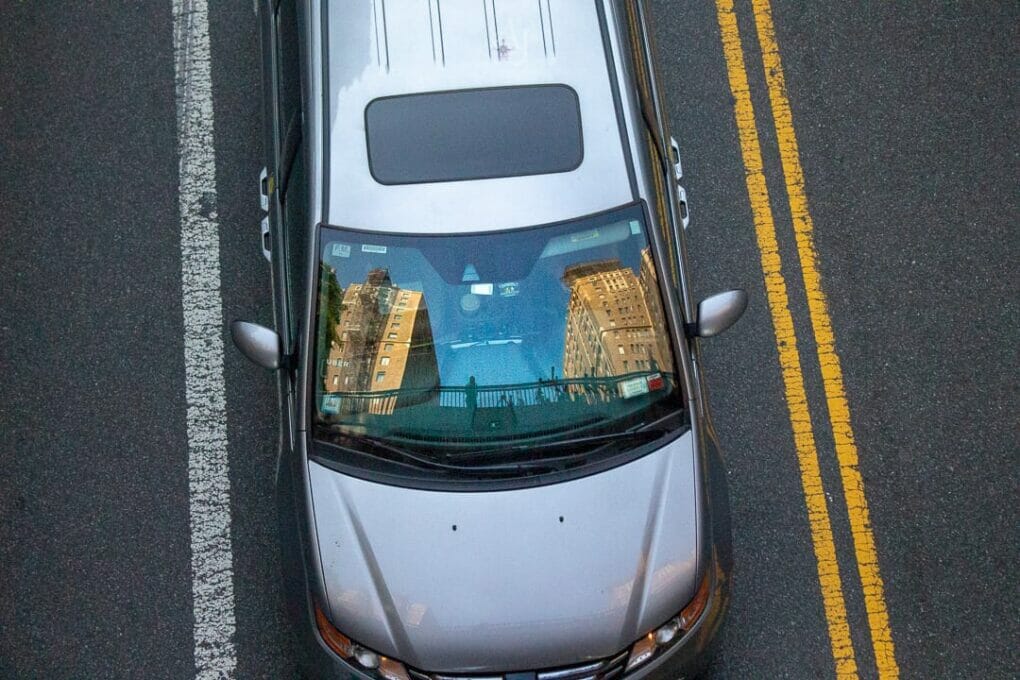 That’s us, waiting in the heat for the sun to set.

As you could image, we drew a crowd. Quite a few people don’t know about Manhattanhenge so they often asked one of us what was going on. Some people stopped beside us to gaze down the street, trying to see what we were photographing. People in the cars below actually slowed down or stopped, in the way, to photograph us.

Watching people react to us kept me partially entertained. They made me look up from my book to check out my fellow photographer’s setup. 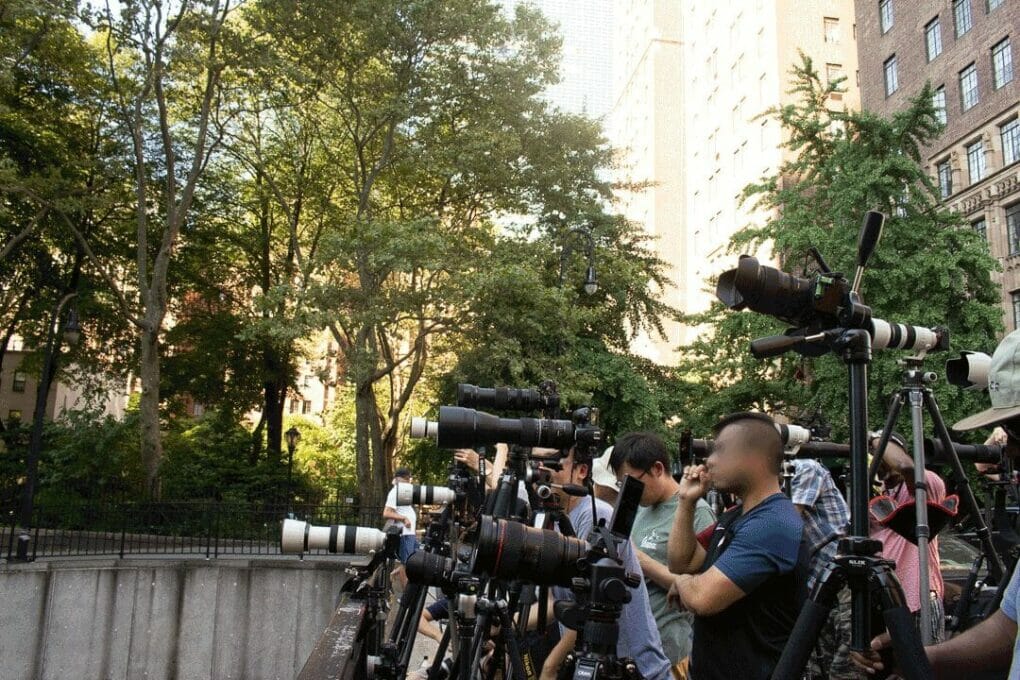 I got to experiment with those cool purposefully blurred images I’d been seeing. It’s pretty much photographing moving objects at a slow shutter speed. The crowd got bigger, much bigger, as it got closer to the time for Manhattanhenge. 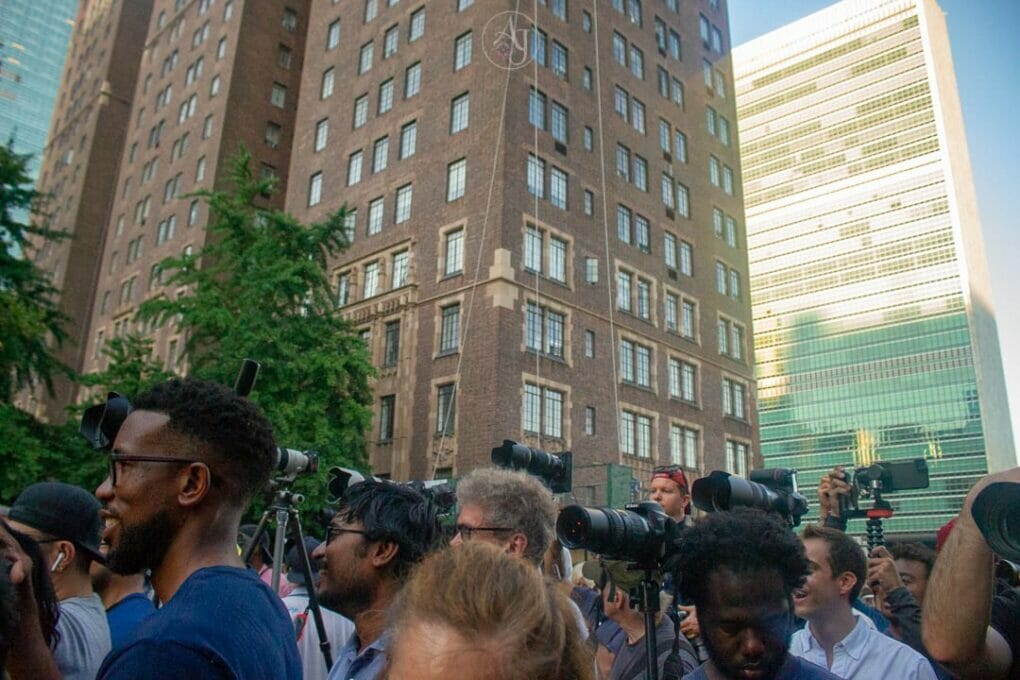 Eventually, photographers below started jumping into the street whenever traffic was clear. That was entertaining. Some people didn’t even move when cars came, forcing them to stop or drive around people. 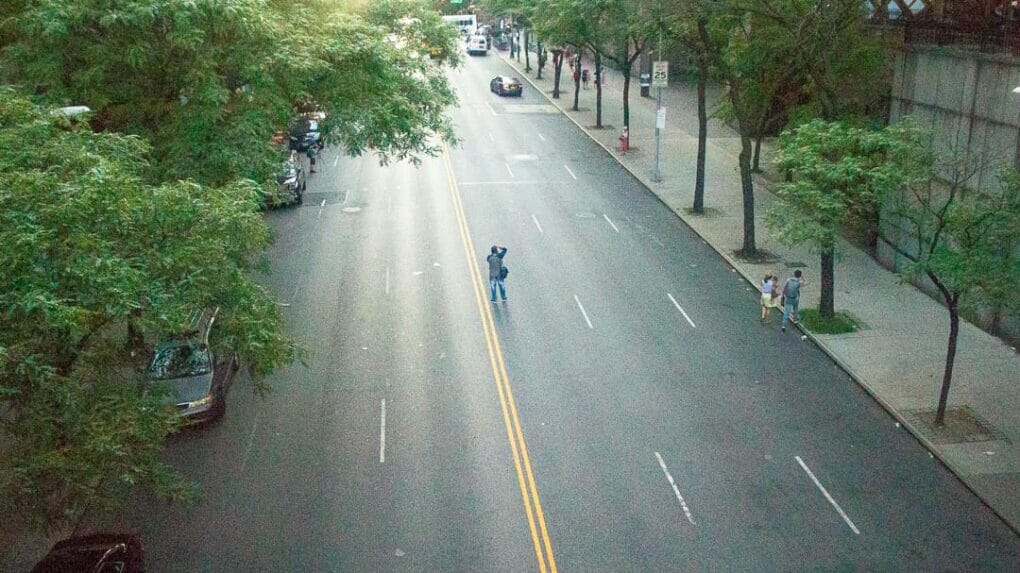 The best way to capture Manhattanhenge is to photograph in the middle of the street. 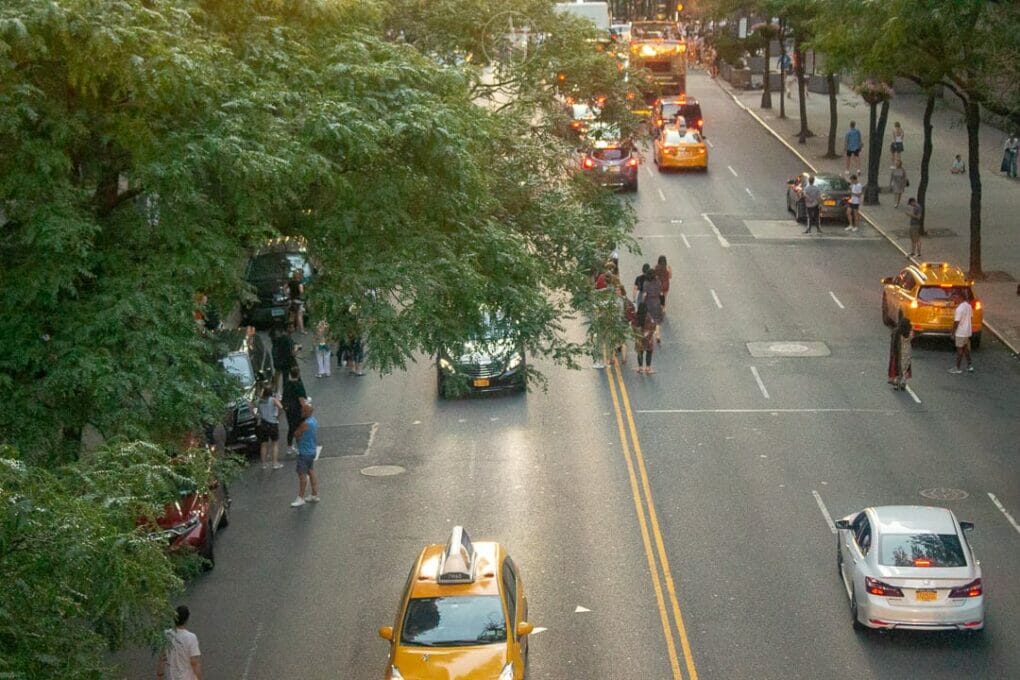 If only those trees weren’t in the way. 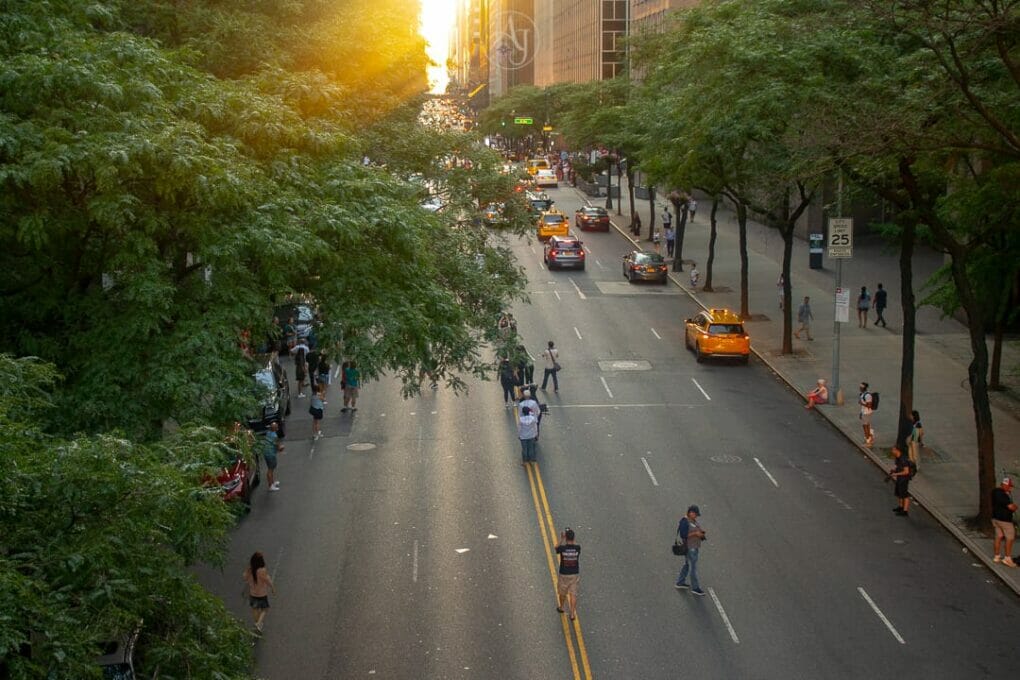 Eventually, police blocked off this section of the street so cars couldn’t pass.  I didn’t even know they did that. I think they only block the street for this area. They definitely didn’t do it 3 years ago near Times Square. We packed the street until Manhattanhenge was over.
Some people even turned around the photograph us. I kinda wish I got a good photo of the crowd. People were in the street. Police had to come by and make them move because they were blocking traffic. But, from where I stood, I couldn’t get a good shot of the crowd.
The sunset happened but Manhattenhedge did not. Well, it did, but we didn’t see it. The big, wide sky was perfectly clear except for this stubborn patch of cloud that parked itself right in the way. So, the sun passed between the building but it was behind a cloud. 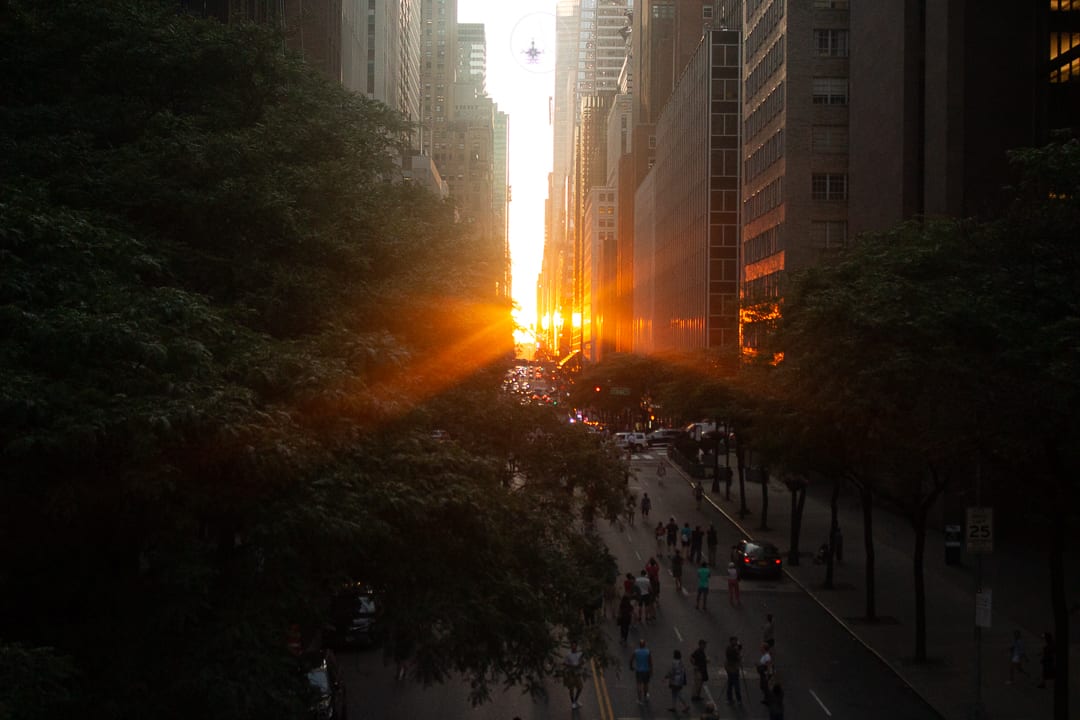 Standing for 5 hours in the sun for that? Well, I got a good story out of it.  Funny enough, I took one of my favorite photos after Manhattenhenge was over after I left the bridge and with my phone. 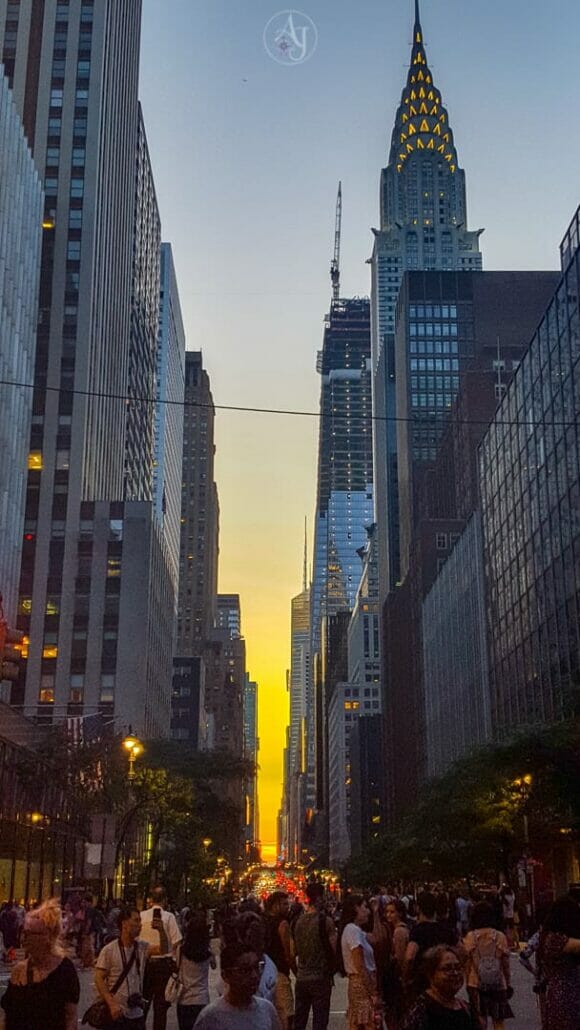 Well done Samsung.
Apparently, NY had a blackout while I was camped out on the bridge. Didn’t even notice it. I felt it on the way home, though. By then, power had been restored but the trains were still a mess. It took me 2 hours to get home.
Categories:

Wow with that first one.