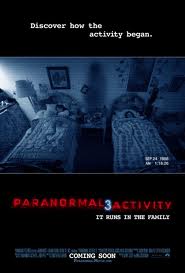 Paranormal Activity 3 sure knows how to make people jump. As someone who has been reading and writing horror and dark fiction since they were a kid, I will admit- I jumped, a lot. I wouldn’t call it scary but I’m not a good judge of what is or isn’t scary. I did enjoy myself though.

It’s not a typical haunted house story. A demon has attached itself to a little girl and throws temper-tantrums when it doesn’t get its way. The story is told entirely from a video camera so we only see what the camera sees. Other movies have done this and failed but Paranormal Activity does this well. They use what people can and cannot see to scare them.

Like the previous movies, nothing big happens at the beginning. It is a brilliant way of building suspense. The real action doesn’t take place until the end but it was so worth the wait. I did not see that coming.

Paranormal Activity 3 was unpredictable. Since I’ve been a horror movie fan for like forever, I can sometimes predict what would happen next but with this movie, I was wrong every time. I loved it.

Just so you know, most of the clips from the trailer are not in the movie. When I read about this beforehand, I was kind of disappointed. But, after seeing the movie, I understand why they did that. The movie is supposed to be unpredictable, it’s supposed to make you jump, to “mess you up.”

If you’ve seen the trailer (if you haven’t, you can watch it below), you’ll remember the part where the little girl is painting and the mother is beside her. The girl throws water at the “imaginary friend” to prove something corporal is there and the demon freaks out.

The part where the girl threw the water at it wasn’t in the movie and I was glad. Knowing what was going to happen would’ve ruined the scene. It’s an interesting technique to use scenes not in the movie for the trailer. Paranormal Activity may be the only movies that could get away with it.

I’m not going to say this is the best horror movie I’ve ever seen because it isn’t but it was entertaining. I like movies that make me jump and the storyline was interesting. Though Paranormal Activity 3 didn’t scare me, I don’t feel it was a waste of money. I’d watch it again. Although it wanted to freak you out, it didn’t resort to unnecessary gore. Paranormal Activity 3 was subtle. It required you to pay attention.

I knew about saying Bloody Mary in the mirror three times since I was a kid. I never believed anything would happen but I still never did it so- a hand-clap to the little girl for being brave enough or naive enough to turn off the lights and say Bloody Mary in the mirror three times. I’m 26 and I still have no desire to do it. I’ve watched way too many horror movies.

That's interesting that the scenes in the trailer aren't in the movie. I guess I can understand why but I bet a lot of people will be annoyed by it too. I haven't seen any of the paranormal activity movies, but this one does look good.