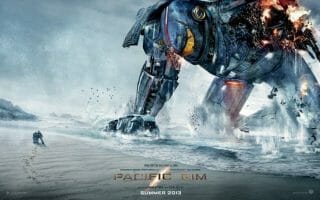 I had a total nerd moment when I first saw the trailer for Pacific Rim. It’s like a live-action anime- only it doesn’t look stupid! Every time I saw a movie poster or a new trailer, I got really happy. This is like the ultimate nerd movie. I mean come on, a major trope in anime is giant piloted robots being used to fight the world’s problems. I seriously can’t believe they actually made a movie like this. It’s like a video game and anime in one!

Calm down. Take a breath. Let’s take a step back for a moment.
The buzz around Pacific Rim was ridiculous. Almost every blog or website I’m subscribed to mentioned it at some point. When I first learned about this, I thought this would be one of those fun movies most people wouldn’t care about. I was wrong.
The trailers focused on the epicness that is a movie about giant robots fighting giant monsters. We really didn’t get much more about the plot. I went into this thinking it would simply be really nice to look at and it was. You know the details we got when the Autobots and Decepticon transformed in the Transformer movies? That’s the kind of detail we got here. It was amazing just watching the robots move and fight and watching characters pilot them. I mean, the people behind this movie put a lot of thought into the visuals.  The robots were just awesome. 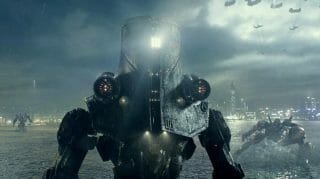 But, it wasn’t just something nice to look at. I thought Pacific Rim would be all fight scenes and explosions. It was a more character-driven plot. Yet, the robot v. monster battles were important and epic. We got to see the people behind the battles. Come to think of it, despite it being a movie about robots fighting monsters trying to destroy the world, I can’t remember many explosions.
The only kind of monster movies we usually get are the Sy Fy Channel B-movies- you know the ones you’re not supposed to take seriously. They usually rely on too much gore and not enough plot. They’re just supposed to be fun. Movies like those are breeding grounds for cliches. It was a nice change to watch a sci-fi monster movie that wasn’t comical. Pacific Rim did have its cliche. They were forgivable. The movie was pure awesomeness. It tugged at your emotions. I actually took these monsters seriously. They were as much characters as the people and robots. Those things could move. 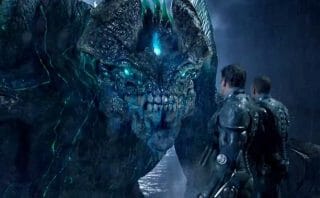 This was an apocalyptic movie that was big but not too big. We got the monsters destroying cities. Pacific Rim didn’t focus too much on it the way most apocalyptic movies do. We saw enough of the world to get the sense that the monsters appeared everywhere. We got the impact they had on cities without it being over-the-top. The movie didn’t spend a great deal of time on the monsters tearing up cities without reason. Pacific Rim focused on the Jaeger project, the giant robots, and how the people involved in this project were working to save the world.
For the world-building- this movie could’ve gone really wrong in this department. It handled it pretty well. Though it was sci-fi, it wasn’t bogged down with too many technical terms. I could understand everything people were saying. The technology and the story behind the monsters were solid without being too complicated or too comical. It was believable. Most apocalyptic movies surround one race, one nationality. This one had several as important characters. It truly represented the world trying to fight these monsters.
When I saw this movie was being released in 3D, I had to save up my money. I just knew Pacific Rim would be awesome in 3D and it was. Paying that extra money wasn’t a waste. They used 3D as a way to bring us into the movie. It wasn’t used to throw stuff at us.
At a little over 2 hours, Pacific Rim ran pretty long, but you didn’t feel it. The plot wasn’t deep. At the same time, I wasn’t too shallow. By the way, the title sounds cool, but it’s so wrong for this movie. Pacific Rim is purely for entertainment. I doesn’t broaden your mind. It doesn’t make you think. It breaks your heart without making you cry. It’s a good way to get lost for two hours.
Categories:
Tags: animemoble-suitsmonster moviemovie reviewPacific Rimrobotssci-fi

"It's like a live-action anime- only it doesn't look stupid! "

LOL, this is a great way to visualize this. 🙂

"They used 3D as a way to bring us into the movie. It wasn't used to throw stuff at us. "

Still, with the technology we have today, 3D SHOULD be putting us in the story and not focused on old tech features the likes shown in Friday the 13th part III.

Sometimes, they just use 3D movies to suck more money out of peple. Pacific Rim was perfect for 3D. Some movies just aren't. I think one of the Saw movies was in 3D. I didn't see it but that was just pointles.

How have I not heard of this?

Lol, I only knew about it because I was bored one day and was going through upcoming movies on IMDb.

Ultimate graphics and actions though the typical story of the movie looses it's grip in some parts but the action freaks such as myself will like the movie.