Write a Story with Multiple Voices

Along the lines of multiple perspectives- how do you keep several distinct voices in your head? How can one author manage to write a story with multiple voices? Even if you have only 3 or 4 POV characters, you’re novel could still have a large cast. Each of those characters needs their own voice?

The first novel in my series has only 4 POV characters but has a cast of about 10. Here’s how I keep a handle on all those voices. Hope this helps you.

Personality: Has her sweet moments. She acts like a child most of the time, but has her mature moments. Hears her common sense, but doesn’t listen to it. Gets people to like her just by being herself (as long as they look past the exterior). Resilient. She doesn’t stay down, doesn’t give up. Fighter.

Inner Struggle: She’s the only half-human being in a village of full-blood beings. The villagers hate her because she’s a half-breed and because she never learned her place. She somehow got the protection of the two most popular Del’Praeli which made the villagers even angrier. They’ve made it their life mission to break her. Because of this daily onslaught, Shade has a poor self-image. She has to often hide her self-consciousness because it is a weakness.

Personality: Has little patience. Cares for no one outside of his circle. Determined, persistent. When he gets his hands on a project, something he’s passionate about, there’s little that’ll stop him from completing it. Will do what it takes to protect those he cares about. Thinks little of his own needs. Can be fairly level-headed, but Shade can drive him to see red.

Inner Struggle: Ever since he was eleven, his entire life has revolved around protecting, training and caring for Shade. Not once had he ever thought about what he wanted out of life or what would be best for him alone. Now that Shade no longer needs him to fill those roles, he’s lost and angry. His brother was his only parent. He’s never had a much older figure to look up to. His guardians see him only as a possession.
Lafeyette Slaughter

Personality: Really arrogant. Believe’s he’s above everyone. A little mean. Really judgmental. Powerful though he was never one to flaunt it. Secretive- he tells people only what he believes they need to know. He doesn’t trust people and hordes information like it’s pirate gold.

Inner Struggle: He doesn’t remember his childhood but is still affected by it. He was neglected as a child and had to grow up fast because he had a little brother to take care of. He was never allowed to be a child and doesn’t know how to be one. He’s overly protective of his family. He visibly withdraws inside himself when those he cares about says something mean to him even if he knows they don’t mean it. His guardians see him only as a possession.

Personality: Likes to feel superior, but doesn’t strip others down to do so. Instead, she likes to be around people who know less than she does. She enjoys holding this knowledge over people by talking in circles. She can be calm most of the time. Extremely loyal to her family no matter how they treat her. Loves to use her power and knowledge to teach others.

Inner Struggle: Sanher, her mother, gave her the last of her dark consciousness and died because of it. Now, her father and older siblings blame Bleak for Sanher’s death. Bleak blames herself for her mother’s death.

Personality: Though he’s not the strongest, he is the family patriarch. He enjoys his roles and doesn’t like anyone else filling it. Doesn’t see the reason to use their powers for fighting. He’s brilliant at creating shields and using his power to fulfill the dark desires of humans. He doesn’t like weakness but doesn’t put others down for being weak. Instead, he simply treats them with cold disdain. He’s not a male who sits on the sidelines. Give enough time, he could think his way out of any problem or avoid it in the first place. Stubborn. He thinks he’s always right. Doesn’t like change.

Inner Struggle: He was good at protecting his family when they weren’t in any danger, but when they really needed him, his inability to use his power for things other than shielding cost him. He sees it as his life mission to solve his children’s problems. After years of protecting his family, he’s no longer needed like he used to be. He’s proud of the Tahylur name and doesn’t like it that his grandson doesn’t call himself Tahylur. He wants to go back to the days when the family revolved around him.

…
For me, writing things down helps me remember them. I did this for all my characters and refer to it often.You could make it as long or as short as you need it to be. It takes a while to write, but it gets you thinking about all your characters and their relationships with each other. Including the inner struggle makes you add depth to them so they aren’t merely 2-dimensional. As this is just to get a handle of the characters’ voices, I don’t include physical traits and powers. That’s another list.
Categories: Fantasy Writing TipsWriting Advice
Tags: charactersPOVvoicewriting advicewriting resources

These are good ways to really flesh out the distinct voices of a character.

One of my characters is a soldier, seconded to protection detail. I write him with a very efficient sort of voice… soldiers don't strike me as the sort to waste words.

For him, establishing his sense of duty was important in the way I wrote his inner thoughts, as was, during the course of the manuscript, an attempt on the life of his protectee and the death of his partner.

That's a great way to understand your character's voice. We have to get to know them as if they were real people.

Great post, Auden! When I revise I pick random lines and read them aloud. If I can't tell who said it, I know the character's voice isn't coming through.

I should try that! For my second novel, I'm having a little trouble with voices but, it's still only the first draft. Listing out the characters that way is helping me with that.

I can so relate to Vayle, and the other characters also are distinct from one another. Good job!

I'll try this one myself. I think I'm at a point where I'm getting to know each of mine. This will be fun.

Thanks Diane! It was a lot of fun doing this. 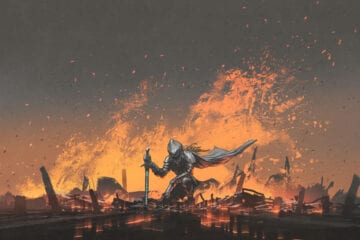