Kathrin Hutson will be awarding a $25 Amazon/BN GC to a randomly drawn winner. Enter via rafflecopter at the bottom of the post.

As writers, it’s challenging not to get caught up in all the intricate details of our worlds, wanting to share every little morsel we can with our readers. As readers, we want to feel like we’ve been transported into this world and can trek its hills and valleys as if they were our own.

Tread carefully, creators of the realm. For it is a slippery slope when distracting your adventurers by shoving a list of terms, definitions, and appendices in their faces.

Those here for the magic wish to experience it for themselves.

As a fantasy author, it’s important to build a sturdy wall between the immensity of your Fantasy universe and what you allow your readers to see. Think about Pointillism Art. Millions of tiny, detailed dots of paint, all put together in such a way to create an entire scene. Give too much attention to any individual dot or small grouping, and you lose the beauty of the painting.

Here are some tools for you to use when building your supreme Fantasy masterpiece, and the difference when adding them to the actual written work of your novel.

Of course, every story and world is different, as is every author. These are general guidelines I try to follow in my own work, and I hope at the very least they’ve sparked some inspiration (and maybe made things easier).

Thank you so much, Dark Treasury, for hosting this stop on your site today. I’m thrilled to be here and so grateful for the opportunity. –Kathrin 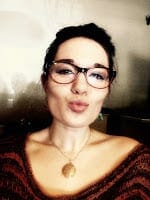 Kathrin Hutson has been writing fiction for fifteen years, editing for five, and plunging in and out of reality since she first became aware of the concept. Kathrin specializes in Dark Fantasy and Sci-fi, and the second novel in this series, Mother of the Drackan, will be released this February.

Kathrin runs her own independent editing company, KLH CreateWorks, for Indie Authors of all genres. She also serves as Story Coordinator and Chief Editor for Collaborative Writing Challenge, and Editing Director for Rambunctious Rambling Publications, Inc. Needless to say, she doesn’t have time to do anything she doesn’t enjoy.

You can grab your copy of Daughter of the Drackan, in print or as an ebook, on Amazon here: mybook.to/daughterdrackan 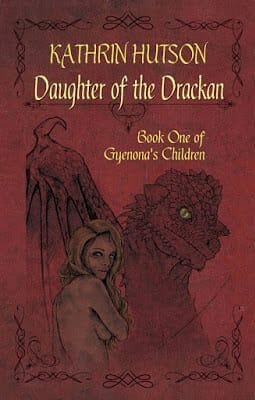 Keelin is the only human fledgling, weaned by the drackans of the High Hills and given their instincts, ferocious strength, and fierce hatred for humankind. But even the drackans closest to her cannot explain why she has violent blackouts from which she wakens covered in blood.

A desperate, reckless search for the source of this secret brings her face to face with the human world and memories from a locked-away past, long forgotten. Keelin becomes a terrifying legend among human assassins while she hunts for answers, and the human realm’s High King is murdered.

While a sickly steward hides within crumbling walls, commanding her every move with a magic he should not possess, Keelin’s journey to track him down threatens her loyalty to the drackans who raised her. The rogue who crosses her path hides familiar secrets, echoing her own terrifying bloodlust and forcing her to consider that there may be something human about her, after all.

Igetheyr stood unmoving, and E’Kahlyn gently unfurled her red-brown wings. The child sat atop the drackan’s scaly back, legs huddled up to her chest. She too stared at Igetheyr, eyes glowing from beneath the shock of tangled hair.

The others snorted and growled at the human, their hatred and bloodlust already thick in the air. The drackans’ centuries-old feud with the scale-less race ran deep within their blood. Seeing one now in their home stirred timeless memories of the war, so long ago, that had started their hatred in the first place, and memories of the last human fledgling who had turned astray.

Igetheyr shifted his eyes toward the child, expressionless until he chose to speak. E’Kahlyn shot her mind-voice in a direct, shielded stream to the child, hoping to reach it before Igetheyr did. ‘Have you heard our discussion?’

A light, purple-gray blotch found its way slowly to her mind with the feeble words, ‘I did.’

The child slid to the ground, gazing at the drackan with pleading eyes. E’Kahlyn nudged her forward with her snout. The child stumbled toward Igetheyr’s great figure and placed her hands behind her back. Her narrow chest stuck out vulnerably, head held high, and she met eyes with the black drackan. Fear did not exist in the child, as if it never had. She was part of the new world around her now and still so disconnected.

Igetheyr snorted, seemingly entrapped by her boldness. E’Kahlyn opened her mind to just the two of them, eagerly awaiting the important exchange, the final word.

Kathrin Hutson will be awarding a $25 Amazon/BN GC to a randomly drawn winner via rafflecopter during the tour.