The She-Wolf of Kanta: A Short Trip Into a Interesting World

I’m always happy to see a dark-skinned main character in a fantasy/sci-fi/horror story. I like it even more when they’re just regular people. As soon I read the main character, Mercy, was dark-skinned with blue eyes, I was sold. Fortunately, The She-Wolf of Kanta didn’t disappoint.

In She-Wolf of Kanta, werewolf is like a disease that swept through the world. Werewolves rule the night. People make a living hunting and selling them…and females.

Mercy is 13 and the story really lingers on the fact that she’s pretty and in danger of being kidnapped and sold. It made me a bit squirmy. The way nearly every charactered emphasized her looks had me thinking something really bad was going to happen to her.

It did. But it was the kind of bad I could handle. Given how to story progressed, I understand why the author set it up like that.

I also like how the werewolves aren’t simply black and white monsters. At the beginning of the story, you think they’re just mindless killing machines. As the story progresses, you learn they’re complicated.

The She-Wolf of Kanta is a novella. I hadn’t known that going in. It’s a short, entertaining read. I do wish it was longer. The section told from Mercy’s father’s point-of-view was interesting but I don’t know if it needed to be included. The rest of the story is from Mercy’s POV. The section was a bit jarring.

If the author wrote a novel version of this, I’d read it. I’d like to know more about this world and Mercy. 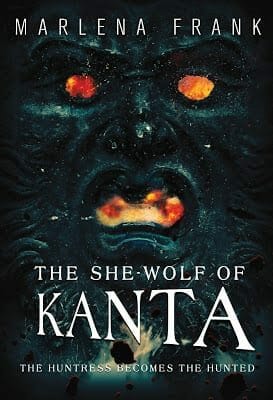 “A pair of yellow eyes caught the moonlight and locked onto hers.”

Mercy has always dreamed of becoming a werewolf trapper like her father. In Kanta, one must learn how to survive one way or another. A dark-skinned, blue-eyed young beauty, Mercy understands that she brings out the beast in monsters and men. When a routine werewolf delivery turns into a vicious assault from a pair of human traffickers, Mercy’s life changes forever. Somehow she must endure in a dangerous city where women and werewolves are hunted.

A writer of both fantasy and horror, Marlena’s work is in a smattering of anthologies. Her stories lean toward weird horror, creature horror, and YA fantasy. She typically thinks up strange tales while sipping sweet tea at her Georgia home, listening to podcasts on her hour-long commute, or while reading a good book with her three cats.