The Streets are Empty: New York Shuts Down

The silence is the worst. You can’t see it in the pictures. You’ve gotten so used to the sounds you don’t notice until it’s gone. It’s strange how silent Manhattan and Brooklyn has become. 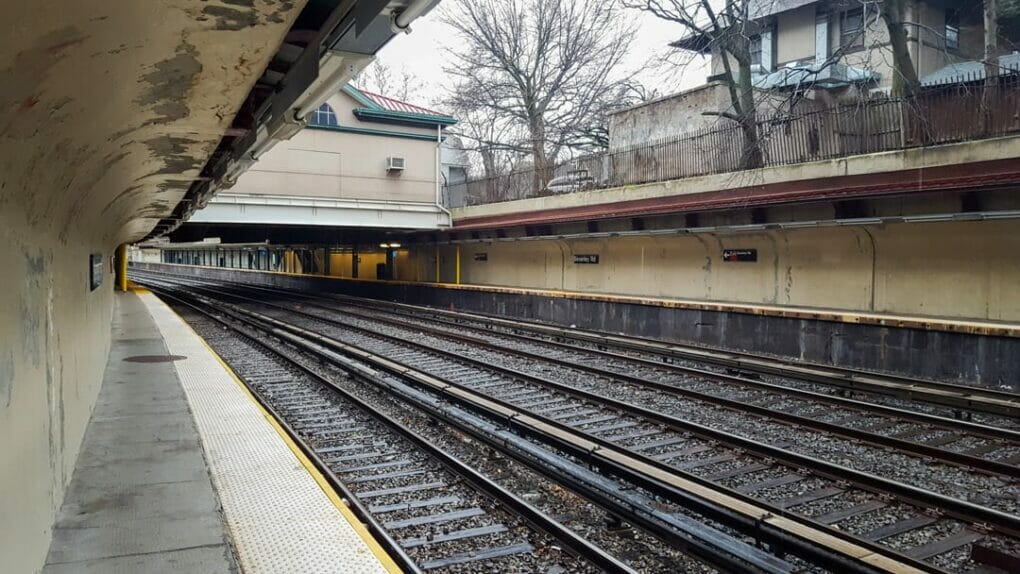 This photo was taken during rush hour. This station is never this empty, even on a weekend.

Since writing and photography are my escapes, this blog post is like therapy.  Maybe it’ll help someone else feel better. 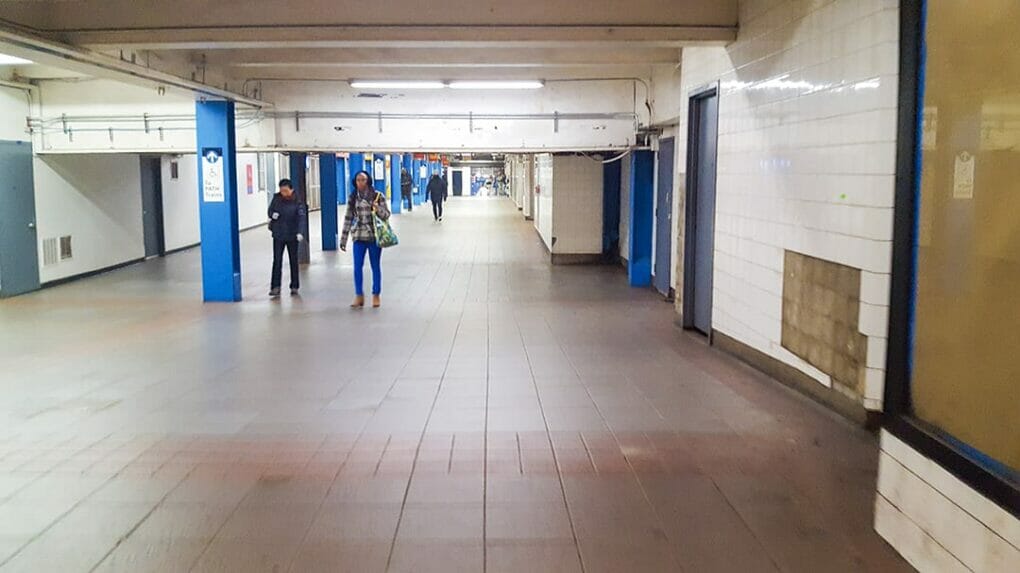 Everything is closing to stop the spread of the coronavirus. I understand why it’s being done. I may not die from the coronavirus but I could inadvertently pass it to someone who could. NY started by banning gatherings of more than 500 people. Now, they’ve banned groups of 50+. My church is closed for the foreseeable future. A lot of things are closing for the foreseeable future.

I live in Brooklyn and work in Manhattan (the city). NYC may go on total lock-down, which means I won’t be able to go to work. Which means, I won’t be getting paid. If the city closes for a month, how will I pay rent? The NY government said they’ll provide financial help. But, I’ve been on public assistance. They don’t give you enough to cover rent.

Funny enough, while I’m writing this, the news is playing in the background. Just heard the state suspended eviction proceedings. That’s a load off. Though getting behind on my rent is going to be a problem. Don’t really make enough to cover any back rent. Doubt I’ll get any back-pay if the city closes and I can’t go into work.

You can still get in and out of the city but most places are closed.
Why am I still going to work when the state is heavily encouraging people to stay at home? Mostly for the reasons above. My job can’t be done remotely. Our office is still open and helping clients. Since I have to go into the city, I may as well photograph everything.

Fighting the panic gets easier when I’m focused on how Oreo and I are going to live if we’re stuck in my apartment or in my neighborhood for a month or more. I already have a couple of online side-hustles going on. Some books I’m about to publish.

I run errands and see the street empty. This store looks closed, doesn’t it? 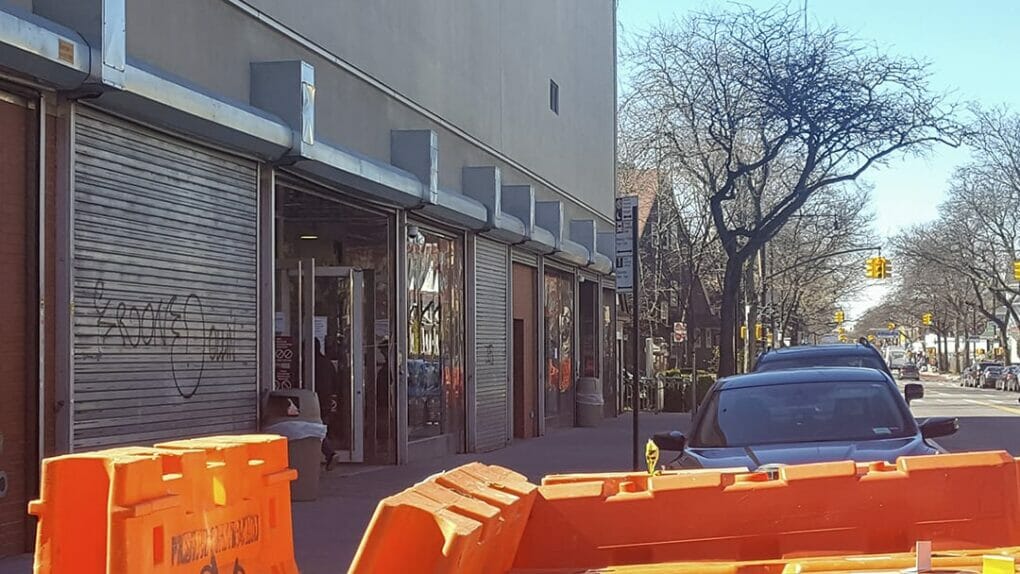 I’ve been living in Brooklyn for about 11 years. This store is never ever empty. I’m on my way to church and people are waiting to go in, on a regular day. You usually have cab drivers parked outside. This is Bobby’s in the middle of the day on a Saturday and it looks closed. You walk in and you can actually walk the aisle without squeezing past people. 11 years and this has never happened. It’s creepy.

I actually got a seat on the train yesterday morning during rush hour. 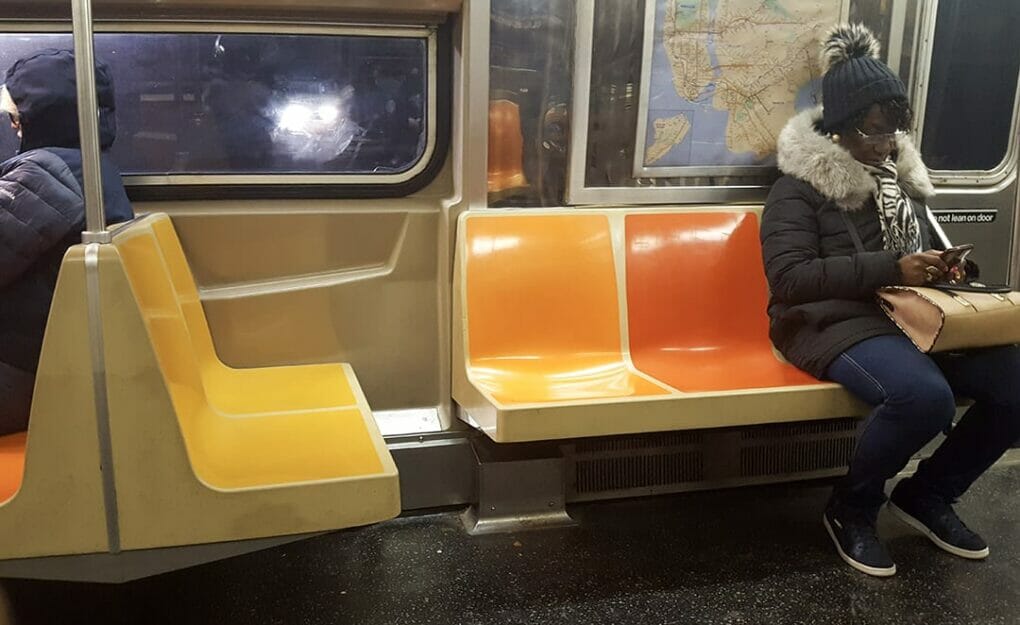 Usually, you spend the train ride with some learning against you. On rare the occasion you get a seat, you have a standing person almost touching your knees, their bag practically in your lap. The elbow of the person next you keeps hitting you whenever they take out their phone.

Here’s another funny thing. The news just said NY is calling on grocery stores to close voluntarily. All morning, I keep hearing/reading people say you don’t have to stockpile groceries. All you’re doing is wasting food, they said. But, if your grocery closes, how will you get food? You can have it delivered. But there’s probably a delivery fee for that. I know it’s more expensive to order through Grubhub than go to the store.

There should be a balance between buying what you need just in case you’re stuck inside for a month/ stores closing and emptying the shelves because of fear. I needed bread because I make sandwiches for lunch. I went to 2 grocery stores and the bread aisles were picked clean. Sugar is kind of a staple for me because I drink a lot of tea and make my own iced tea. I ended up buying the cubes because all the sugar was gone. Fortunately, my smaller grocery store had some. 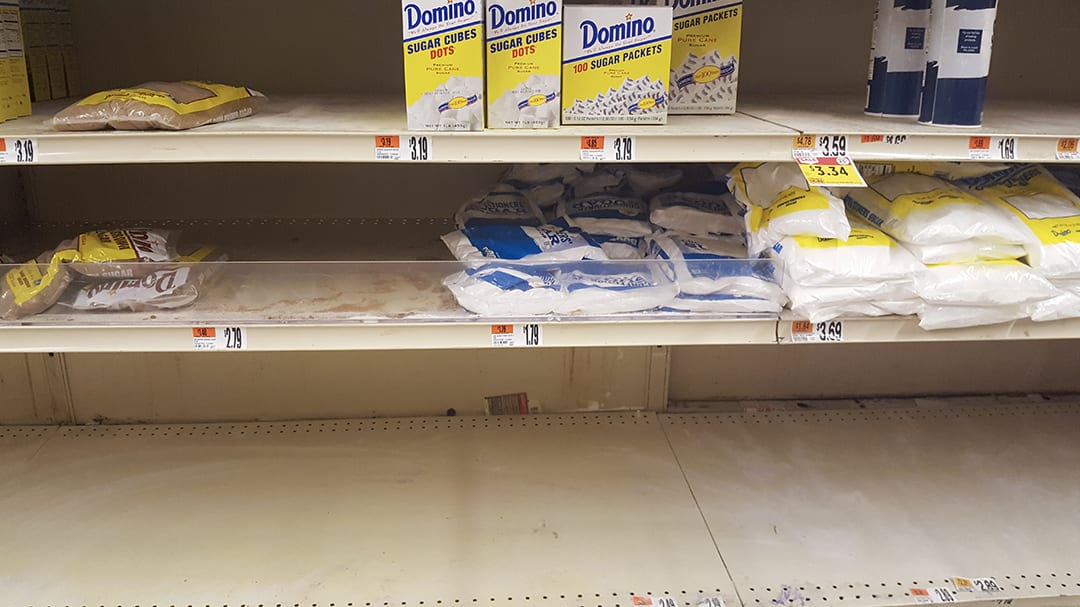 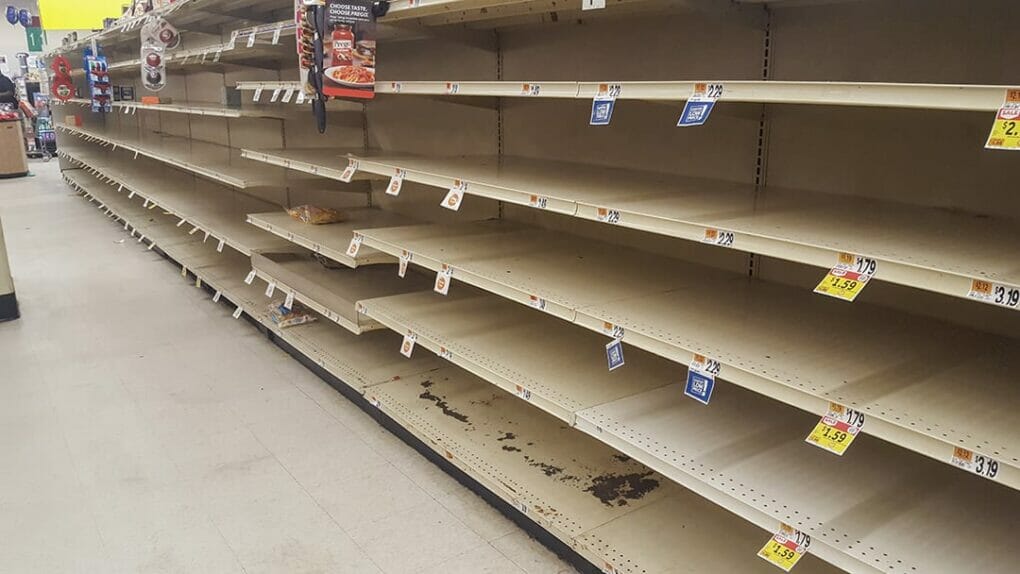 I’ve read enough apocalyptic stories to know people start to act a little crazy. Oreo knows how to make a lot of noise. She’s an ankle-bitter but she’s not scaring anyone when they actually see her.  Look at this killer. 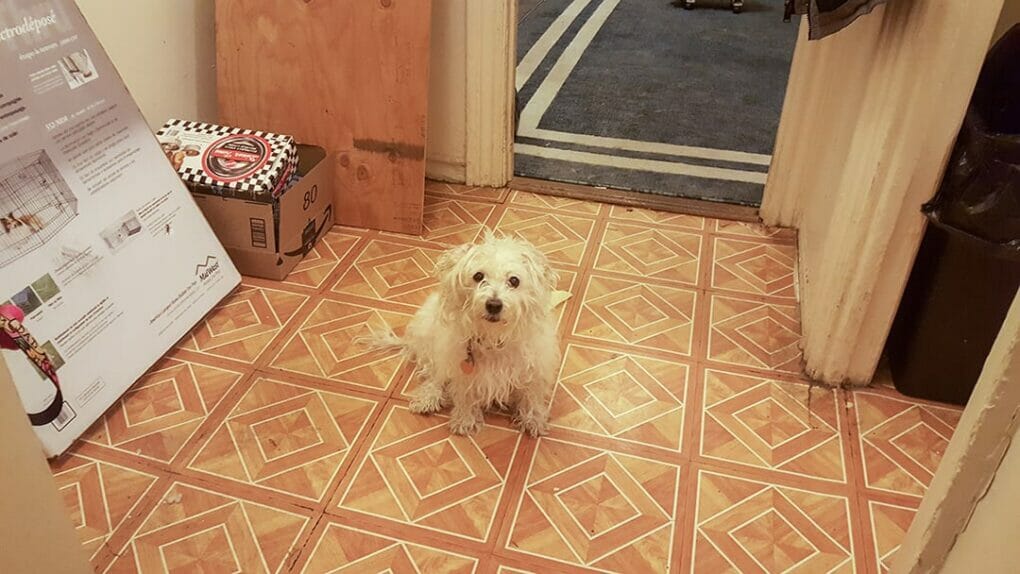 She’s good company though. I’m not one of those New Yorkers who enjoys crowds. In fact, I’d been getting tired of dealing with large crowds everywhere I go. I used to walk to work slightly annoyed because the train was so packed it was hard to breathe. Then, I’d get off and have to deal with more people on the street. 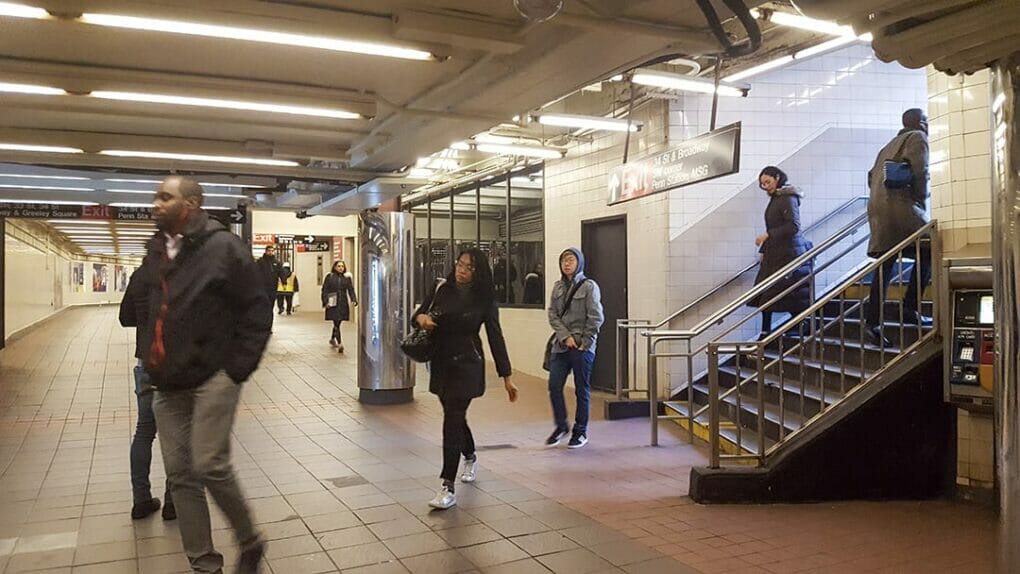 On a regular day, tons of people would be walking up and down those stairs while even more come from the hallway further in. I need that hallway. I can exit up the stairs but that leads to Herald Square near the famous Macy’s. On a regular day, the area has some rage-inducing crowds. So, I avoid it. Getting to that corridor used to be a chore because of the steady stream of people going up and down the stairs. But, that’s no longer the case.

Even after all this, I don’t regret moving to NY. If it had to happen, I’m a bit glad I live in NY. It has its problems but the state seems to be making sure people aren’t thrown out on the streets because of this virus. I don’t often get political but I’m not a Trump fan and it’s hard to believe anything he says, even if it’s the truth, which it rarely is. I never want to hear the word tremendous ever again.

I’m more than a little worried. This post turned out longer than expected. Trying real hard not to panic. I like writing about a fictional apocalypse. Never really wanted to live it. I don’t think this is the end of the world but, it’s the end of life as we know it, as least for a while. This is the new normal. We’ll get through this.

Thanks Cat. Most days I'm fine but the city get emptier every day. It's just so strange.

Hugs, Auden, and I hope it turns out well for you. I agree about the crowds, though. I normally hate them, but to see NYC so empty, it's surreal.
Here in the UK, we've not got beyond the recommendation stage. Recommended to stay at home. We shopped yesterday. No toilet rolls, kitchen tissue, rice, pasta, bread flour, although bread isn't in short supply. People seem to be buying a year's supply of everything non perishable. I think the supermarkets should ration these things so everyone has the chance to buy. They also know what individuals normally buy through their loyalty cards. If someone doesn't usually buy 5kg packets of rice, they should query it. (We do buy large packets.)

Never thought about rationing but it would be good if stores did that so people actually get the supplies they need.

What an insightful article, Auden.
I was just asking my husband this morning what NY must be like. We were at Times Square after 9/11. The crowds were like you described and there was a constant roar of noise. I bet the quite is eerie.

Take care and let's hope this all calms down soon for everyone.
I'm thinking about you.

Thanks for the update on life in New York. I hope you stay healthy. And, yeah, people in Toronto have bought up all our flour, too. 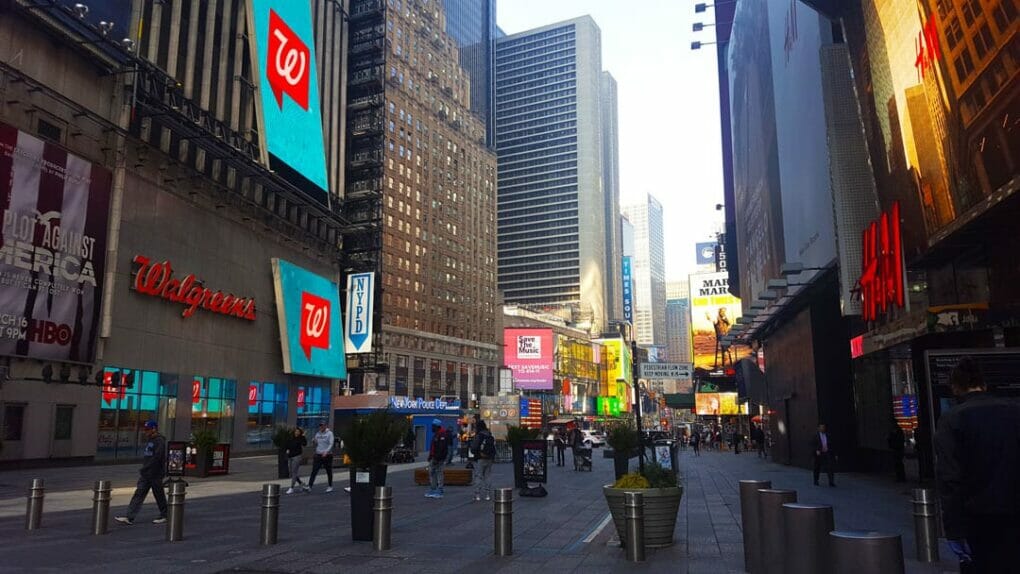 Quarantine Life: Ways to Cope in a Coronavirus World

You see the hashtag QuarantineLife or the memes that introverts and gamers have been preparing for this their whole lives. They make you laugh, nod your head in agreement. I’m still laughing at this video Read more…