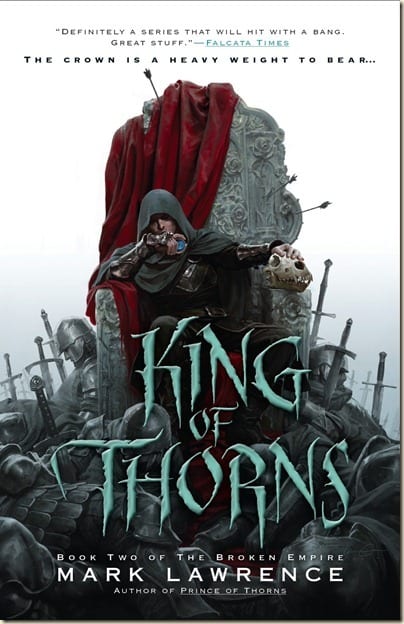 Ever read book you didn’t want to finish because it’s that good; a book where you can’t help but break out the highlighter?

I loved King of Thorns. Another amazing cover by the way. This is the second book in Mark Lawrence’s The Broken Empire series. The first was Prince of Thorns.

The story centers around one major event with about half of the book being backstory. I had trouble getting into it at first because of this format. There are a few chapters in some of my favorite books, including Harry Potter, I haven’t read because they’re all backstory. I don’t like it when authors break from the story with a chapter of backstory. With King of Thorns, I couldn’t skip section because I’d miss half the story.

What kept me going was the voice. I love Jorg, the protagonist. He’s got a whole lot of attitude. I’ve never come across a character like him. It’s awesome. Had to break out the highlighter. I tried to resist since I don’t like writing in books. Makes rereading them a bit irritating. But, I couldn’t help it. Some books have the one liners that make you roll your eyes. Jorg’s one liners make me so happy.

King of Thorns was a brain work out. It’s been a while since I read a book that had me thinking so much. It’s written backwards almost. You see the results before you find out how the character reached this point.

Without giving too much away, one character kept referring to an event. Every time she mentioned it, I kept thinking back to the first book wondering when this happened. It was maddening. I didn’t remember it the way she did. I was tempted several times to stop reading this book and reread Prince of Thorns. Then, I reached a point in the story where the narrator explained why I didn’t remember said event the way this female did. All I can say is well played author.

Writing this way could go wrong. Just like his first book, the author explains nothing. As the reader, we are simply taken along for an intense and sometimes maddening ride. This story is a puzzle but no matter how many ways you examine it, the tale never turns out quite the way you expected it. It’s unpredictable without the ending coming out of left field.

The story is dominated by men which is not a problem for me. The two main women in this story are amazing. In most books I read, I tend to favor the males over the females. I usually just put up with the women but the two in King of Thorns were awesome. They remind me of the queen from 300. If they’re afraid of something, we wouldn’t know it. They hid it under several layers of steel. Well, not really hid, more like they see what they’re afraid of, acknowledged it but don’t let it control them. I love female characters like this.

Now that I’ve finished King of Thorns, I don’t know what to read next. Everything on my shelf pales in comparison. Wish there were more books like this one.

I love when books make me break out the post-it notes and flags!

When I get deeply immersed into a story, it is distracting for me to have to break away because of backstory. I know it's needed, but I like it sprinkled throughout in small bits. I'm not really fond of like backstory in a full chapter.

I have read some authors who have used backstory like that, one was Orson Scott Card, but his prose is so wonderful I can forgive it. 😀

I love it when books are written sort of backwards. Where you don't know the whole picture until the last chapter. Gene Wolfe does that a lot, have you read him? I can see how chunks of backstory would be distracting, but if it's done right, I love it. My copy of King of Thorns is sitting right here, reading it is going to be my reward for slogging through some other stuff that's been on my TBR pile for ages.