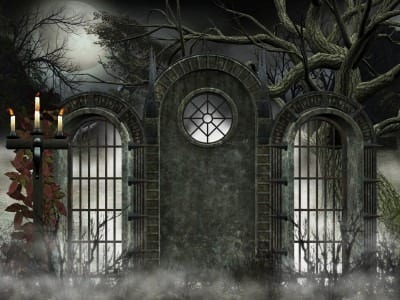 No, I’m not talking about the anime 😉

When is a story too dark? I’ve often come across some variation of this question between Goodreads and Google+. It got me thinking about what a dark story is. It’s different for everyone.

When someone says a story is dark, what does that mean- to me anyway?

I’ve said it before, I have a fascination with darkness. I’ve done research on Carl Jung’s Shadow (Inner Demons). What I love about horror and dark fantasy is that the stories”go there.” I’ve read books in other genres and, for me, dark fantasy has the best and most entertaining characters.

Here’s my response from the Goodreads discussion: How dark is too dark?

I love Prince of Thorns and The Black Jewels Trilogy: Daughter of the Blood, Heir to the Shadows, Queen of the Darkness because the authors pushed the boundaries of what’s considered acceptable behavior.

That being said, I don’t like tragedies. I can deal with a major character dying, Harry Potter is still my favorite series, but I’d rather they didn’t. A character doesn’t need to die for the story to be dark. For me, darkness in a story isn’t about how many characters die. It’s about what each character had to go through. We know Harry Potter doesn’t die, but from book 4-7 he suffered… a lot and that’s what made the stories dark.

I love anti-heroes. This character type is one of the things that defines a dark fantasy for me- when a story focuses on someone with questionable morals. However, there should be some redeeming quality about them or at least something about them that I like.

George R. R. Martin comes up many times in theses discussions because he kills off characters like it’s nothing. Stephen King comes up as well. Bentley Little is another good example of an author who “goes there.” He’s not afraid to thoroughly disturb his readers. His scenes are intense. The thing about his images, though, they can be intense, but not so much you never want to read his books again.

But, to answer the question. Yes, an author can go too far. Ever see Stephen King’s The Mist and Storm of the Century? Great movies, heartbreaking endings. I mean, those are the type of endings that make you question why you gave the author your time in the first place.


Anime is also famous for having bleak endings. Wolf’s Rain, Full Metal Alchemist (not Brotherhood) anyone? I’ve heard good things about Jack Ketchum’s books. He’s another author that pushes the envelop, but I’ve stayed away from his books. I want to be chilled to the bone not scarred for life. From the reviews, his disturbing scenes are on a whole different level.

That being said, I’m not one to stifle creativity. If you have a dark scene that you love and it fits perfectly into the story, don’t take it out because some people may not like it. I’m still struggling with this one 😉

So, the next question is, why on earth are people attracted theses depressing stories? I tackled that question a bit in The Appeal of Apocalyptic Stories and Why Do We Like Horror. A good dark story with a bit of daylight in it or a tale that scares me without making me want to disinfect my brain, makes me really happy. And, that’s all that matters.

I love dark stories. Why? I'm not sure. I guess darkness is easier to digest when it's fiction.

That's true. We allow characters to get away with certain things because we know it's fiction.

I love dark stories, too. I guess dark stories help us to deal with our negative feelings.

I never thought of it that way.

Your remark about torturing characters, mentally or physically, makes me think of the antagonists in my own work: what's the worst thing I could do to these people? And of course I had to do it.

It does mean frequently feeling like I have to apologize to them.