In Chains of the Sciell, new villages/towns/communities have cropped up between book 1 and 2. I’m in the process of fleshing out each new place. Here are some things to keep in mind when creating a village/community. 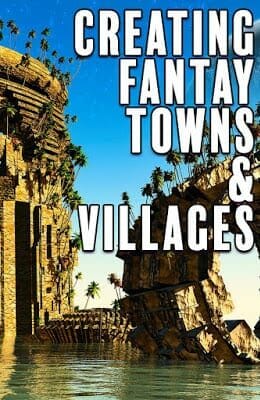 Location
People need food and water. When deciding a location for your village, remember, it needs to be by a water source. It doesn’t have to be located in the middle of the forest. A group of people could have taken over an abandoned town, they could make a home in an underground cave or in a mountain. I drew a map, along with rivers, and placed my communities near those rivers. Location will also determine what type of food people have easy access to. Check out the post Fantasy Maps: Crops

Draw a Map
As mentioned above, a map shows you where the water sources are. If you’re creating more than one village, it also helps you to not put villages on top of each other, or too close to something dangerous. Or, you can put it near something dangerous- as long as you’re aware of it. In Chains of the Sciell, a Wall of Darkness has grown around heavily populated cities. Many people left the cities to make a home as far away from the Walls as possible. Also, my country has a desert that’s impossible to cross. I can’t put anything near there.

Weather
This goes along with location. Does the village get heavy rain, which leads to flooding? Is it in an area that gets a lot of snow- so much that there are certain periods where people can’t/don’t leave their homes? The weather will determine lifestyle. If winters are brutal, people will probably spend most of the year preparing for it.

Building Materiel
What are the homes made of? Mud, stone, wood, brick, steel. Just because this is fantasy, doesn’t mean the world has to be set in medieval times. It would take a bit of work to create new villages in a modern world, but it’s possible. It’s pretty easy if your story is post-apocalyptic. Chains of the Sciell is in the middle of an apocalypse. The world hasn’t ended. It’s changed so much that it’s possible for people to build new communities undetected. You don’t have to build the village from scratch. As mentioned earlier, your people could settle into previously occupied villages. You’ll still have to flesh out how people make it livable.

Layout
What does the village look like? I created a couple of Pinterest boards for each of my villages. Looking at images also stretched my imagination. Though I write fantasy, I got stuck in making the villages “normal.” The images broaden my view of what these villages could look like.

People
Who lives here? How many? Is this a village of people in a certain professional trade? What’s their daily life like? How important is education and religion? This could give you an idea of the villager’s appearance. In my community, Keep Tryst, life there is labor intensive. This means the people, both male and female, are muscular. Are they human? If not, does this effect the village. In Raesul, the community of non-human beings in The Sciell, book 1, the characters’ power played an important role in how the village was run/protected.

Defense
It’s highly doubtful your village will be completely safe. How do the people defend the village? Do they have a group of people who are skilled fighters? Does everyone know how to use weapons? In my book, each village has a series of invisible shields over them. Only the residents can get in and out of the shields safely. (Most of the time).

Trade
It’s highly unlikely your village will create everything it needs. More than likely, there will be a fair amount of trading going on. What does your village specialize it? What do they get from other places? If they don’t have anything of value to trade, flesh out how they survive on their own. Do they send out a group of people to more remote places in search of food and supplies?

Ruling Body
You can create a village with no leader. You’d have to make that clear. Most will have a ruling body- a group of people (or one person) who manages trade, grievances, law, politics etc.

Here’s a good article on this topic: