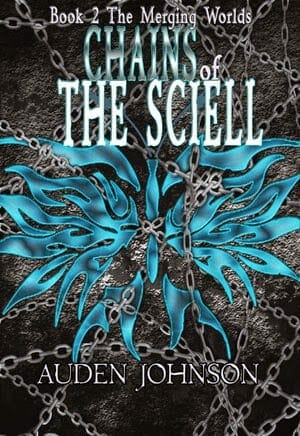 Here’s the cover for Chains of the Sciell, Book 2 of the Merging Worlds series! 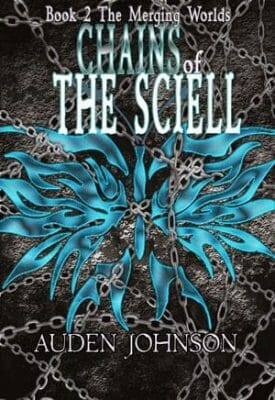 For those making covers or any artwork for your book remember, you probably won’t get what you want at the first try. It’s like a first draft of a novel. Your first try at designing a new cover might be crap. And that’s okay. You have to cycle through the crap to better picture your cover.
Unless you plan it out. Even then, the end result may not be what you envisioned.
I don’t plan. I search through stock photos until I find something that speaks to me. Planning will probably save you money. I paid for some images I’ll probably never use. For me, it’s more fun to be a panster.
I tried this: 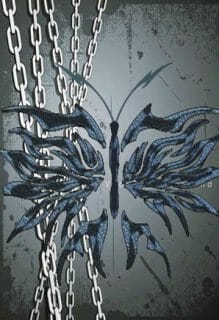 And hated it. Then, I tried this: 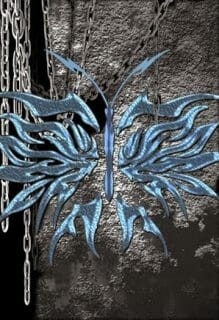 And hated it.
Searching through Shutterstock got me this: 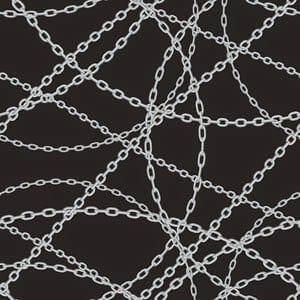 I like the chains but hate the flat background.

For those you are using Photoshop- when searching for stock photos, remember you don’t have to like the entire image. If you only like a piece of it, figure out how you’re going to remove that piece.

I put this grunge image under the chains one. 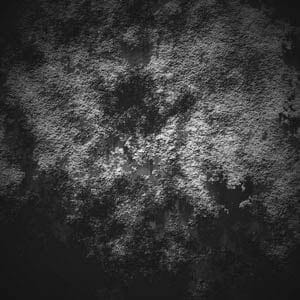 Then, I removed most of the black in the chains image.

As far as I know, there’s no magic Photoshop tool that removes background in one go. I had to select and delete each section between the chains. Sometimes, I had to zoom in and use the eraser because the sections were too small for the magnetic lasso tool. FYI, magnetic lasso, one of my fav Photoshop tools. It’s magic.

By accident, I had the feather set at about 50px which meant, as I was deleting the black, it looked like the some chains were buried in the embedded in background. 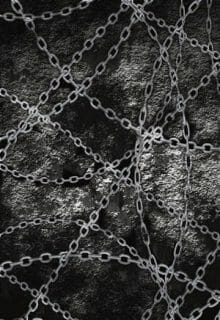 Being bound by connections is a major theme in this book. I wanted the blue butterfly, the mark of the Sciell, to be bound in chains. I had to figure how to confine this: 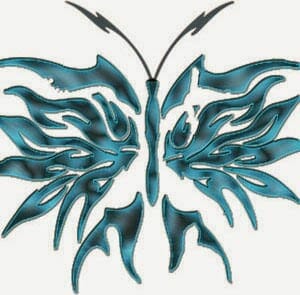 In chains. I didn’t want it to sit under the chains. It would look more like a fence.
I put the blue butterfly on top of the chains image and changed the opacity, made the butterfly transparent. Then, I selected parts of the chains and created a new layer via cut. 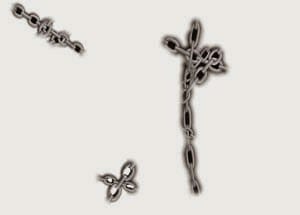 One of the beautiful things about Photoshop is that layers can be rearranged. I moved the new chain piece layers above the butterfly layer– without touching the image. 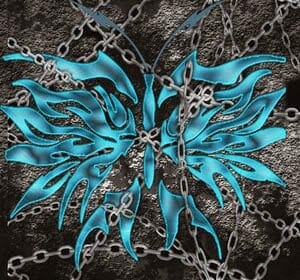 Having some chains go through the butterfly was just a matter of careful erasing. I’ll probably do more with the chains to make it really constrict the butterfly.

Throughout this process, I was doing simple editing to blend the images–make them look like one image not three. 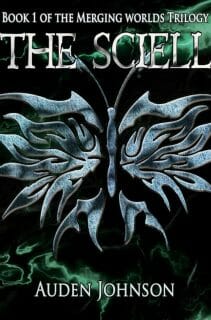 I like all the designs. I changed it for fun. The book only describes the mark as:

…an array of thick light blue and black wavy markings. He dragged his finger across it. He’d seen tattoos on humans. Those looked flat, like they were apart of the skin. This one had a grainy texture but Vayle felt only skin when he touched it. He sat back to see it better. The wavy shapes molded into one design and if he squinted, it did look somewhat like a butterfly.

This gives me some leeway. I haven’t decided if I’m going to tweak the design for each book.

…
Here’s a journal entry from the first Sciell, Mascenore Tahylur. I’ll use a piece of this for the book’s description. Chains of the Sciell will be released May 2015.
The Bonds That Tie.

You would think having so much Power is a reward? How can it not be? We can protect those we cherish. Destroy those who anger us. Humans are food. We’re invincible. I have lived long enough to see the curse. This Power is isolation. It changes us, makes us animals. Makes us poison to those around us.


I plead with you my children, find that person who accepts everything you are. Do not feed that Dark Cage in you soul by creating a false image of yourself. This will weaken your Power. Connect with someone who will free the Darkness. Who will see you. That is the only way to be truly powerful.

But, be weary of those connections you make. Binding someone so deeply to you produces devastating Darkness. I see this in my eldest children Eygress and Bley. They have a connection that goes beyond the natural. They don’t need to speak to know the other is hurting. They can feel the other’s need no matter where they are in the world.


They’re one mind- two bodies. Hatred can grow out of such a bond. They can hide nothing from each other. If one is enrage, the other becomes infected with that anger. They always have someone else in their head. Our Power knows the loneliness of a long life in solitude. To ease that pain, It can turn bonds into chains.