It’s All About Perspective: Deep POV 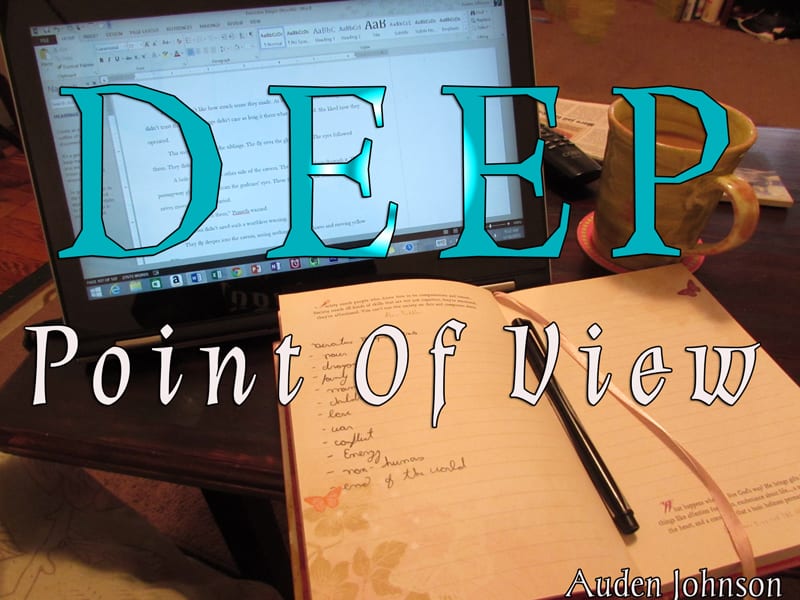 When reading, I’ll forgive bad grammar as long as the story’s not littered with them. I don’t care for the instant connection in most romance stories but it doesn’t pull me out of the book. I’ll even let a bad cover slide.

Bad ebook formatting, whiny characters and most of all, telling instead of showing will pull me out of the book. The inner editor in me comes out.

These tips are for writing first person or close/limited third. They’re also known as deep POV.

“Deep POV is a technique used to get inside the mind of a character and make a deep emotional connection with readers.” (How to Write Deep POV)

I come across this sentence way too often.

If you’re in the character’s head, you don’t need to tell us they looked. Just describe what they saw. If you describe a bird flying in the sky, the reader will know the character is looking at it.

Same with “I swept my eyes across the floor” or “Her eyes roamed his glorious figure.”

“I could see the spreading dark stain flow down the tree to pool at the base.”

If the character is looking at something, we know he could see it. That sentence doesn’t need “I could see.”

This also applies to emotions.

I wiped the sweat from my brow with a trembling hand, fear from my narrow escape coursing through my veins.

Do you feel her fear? Probably not, because even she’s not feeling it. Scared people don’t typically think about what’s coursing through their veins or why it’s doing it, they just feel and think and react.” (Janice Hardy presents: Five Ways to Describe Emotions Without Making Your Character Feel Too Self Aware.)

It’s like using the word to describe the word. I used to fall into this trap until I read the above article.

Fear crept over him

doesn’t do anything for the reader.

I have The Emotion Thesaurus handy for just such occasions. It tells you what’s going on in a person’s head and what happens with their bodies when they feel certain emotions.

Fear crept over him

His arms shook. His legs weighed like twin boulders. He couldn’t move. Couldn’t breathe. It stood over him. Towered. He felt the eyes in his bones. The exit was too far. He’d never make it.

I learned from Write the Fight Right that if a person saw a punch coming, they’d dodge it. This means if a character got punched, they either didn’t see it coming or they saw it and let it happen.

He punched me. I stumbled.

Pain exploded across my jaw. My feet wouldn’t stay under me. My vision swam. A shadow covered me. I blinked. He stood over me- fist balled- ready to hit me again.


These types of sentences often stem from not fulling understanding Point of View or POV.

Point of View: What Does Your Character Know?
[Book] Characters, Emotion & Viewpoint -this book taught me a lot.
Deep POV—What’s So Deep About It

Now, it’s your turn. What will pull you out of a book? What’s your reading pet peeve?