The authors will be awarding a $40 Amazon or B/N GC to a randomly drawn winner via rafflecopter during the tour. 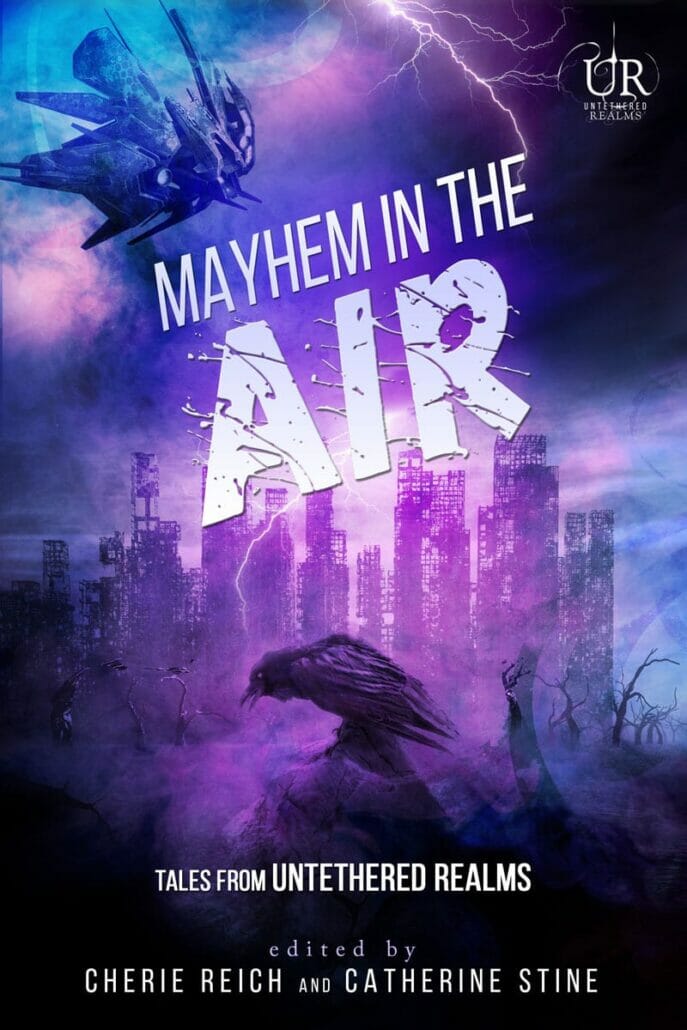 From Amazon bestselling and popular science fiction and fantasy authors comes Mayhem in the Air, a supernatural anthology of ten thrilling tales. Meet hot robots, hungry winds and the goddess of chaos. Explore alien planets, purgatorial realms, and a shocking place where people bury the living with their dead. Mayhem in the Air is the second, long-awaited story collection from the dynamic and inventive Untethered Realms group.

A hiss emitted into his earcom, and his Head of Security said, “We’re ready, Mayor.”

You’re going the right thing. Although he didn’t trust the thought, Alfred straightened his tie and walked out the French doors onto the balcony.

People lifted their gazes and devices toward him. When he threw out his arms, they cheered and chanted his last name, “Merry, Merry, Merry.”

His guards and security cameras would scrutinize anyone not celebrating. Were Maggie’s friends among the city’s citizens? Alfred waited long enough to capture the crowd’s attention.

“Thank you. Thank you.” He patted the air as they quieted. His glance flicked to the sky. No sign of his wife.

Alfred had no doubt his speech would spread across the globe before the first fire baton was lit, so he better do well. Even if Maggie didn’t come to stop him, she would be watching. He had no doubt.

“We have gathered here today to support change. A stagnant world is a dead one. We must evolve to survive. We need to rid ourselves of the items and activities that hold us back as a society.” Alfred paused and gestured to the pile of books and paper.

“A group of Paperists, who call themselves ‘the Ritualists,’ would continue their terrorist acts. They destroy trees to support their special abilities, powers they use to lord over us, to threaten us. We must break free from their tyranny. Getting rid of their tools is our first step.”

Alfred basked in the crowd’s thunderous stomps of approval. Sunlight flashed off the electronic screens, thousands of twinkling stars dancing for him.

Why had Maggie abandoned him so thoroughly? She hadn’t returned as their daughter grew ill. His wife didn’t come to release Angela’s soul when she died of cancer. Did Maggie hate them that much? She had to know what was going on. Unless she’d taken to living under a rock.

That thought sobered him, and he resisted the urge to shudder. “I thank you for bringing what paper you have. United we can stop the Ritualists. Tradition won’t suffocate us. Here’s to our bright future!”

At his last word, three men and a woman broke from the crowd. They held metal batons, and with a flick of a switch, fire sparked from them. At compass directions, these four people stood. As one, they touched the flames to paper and ignited the mound.

River Fairchild is somewhat odd, brandishes a dry sense of humor, owned by several cats. Lives in a fantasy world. A fabricator of magic. Makes stuff up and spins tales about it. Believes in Faerie crossings and never staying in one place for very long. Speculative Fiction wordsmith. The secret to her stories? Spread lies, blend in truths, add a pinch of snark and a dash of tears. Escape into her world. She left the porch light on so you can find your way down the rabbit hole. For more information, please visit her website at http://riverfairchild.blogspot.com.

Gwen Gardner is a native Californian living in sunny San Diego, where her love of reading and writing led to a BA in English literature. Life is now complete with her husband, two dogs and a daily call from her daughter. Since ghosts feature prominently in her young adult Indigo Eady Paranormal “Cozy” Mystery series, she has a secret desire to meet one face to face—but will run screaming for the hills if she ever does. Gwen adores travel and experiencing the cultures and foods of different countries. She is always up for an adventure and anything involving chocolate—not necessarily in that order. For more information, please visit her website at http://gwengardner.blogspot.com.

Misha Gerrick lives in the scenic Western Cape, South Africa, where she’s currently working on some more books. Her Epic Fantasy Series, The War of Six Crowns, is out now. For more information on what she’s writing and reading, visit her website at http://mishagerrick.tumblr.com.

Graeme Ing engineers original fantasy worlds, both YA and adult, but hang around, and you’ll likely read tales of romance, sci-fi, paranormal, cyberpunk, steampunk or any blend of the above. Born in England in 1965, Graeme moved to San Diego, California in 1996 and lives there still. His career as a software engineer and development manager spans thirty years, mostly in the computer games industry. He is also an armchair mountaineer, astronomer, mapmaker, pilot and general geek. He and his wife, Tamara, share their house with more cats than he can count. Please visit his website at www.graemeing.com.

Fantasy, science fiction, and the weird beckon to M. Pax, and she blames Oregon, a source of endless inspiration. She docents at Pine Mountain Observatory in the summers, and one of her cats has a crush on Mr. Spock. You can find out more by visiting her website mpaxauthor.com.

Christine Rains is a writer, blogger, and geek mom. She has four degrees which help nothing with motherhood but make her a great Jeopardy player. She has one novel and several novellas and short stories published. Her paranormal romance series, The 13th Floor, has been met with rave reviews. Her newest geeky romances were released by Ellora’s Cave early 2015. Please visit her website at http://christinerains.net/.

Cherie Reich has more books than she can ever read and more ideas than she can ever write, but that doesn’t stop this bookworm from trying, even if it means trying to curb her TV addiction. She is a speculative fiction writer and library assistant living in Virginia. Her short stories have appeared in magazines and anthologies, and her books include the paranormal horror collection Once upon a Nightmare and the fantasy series The Foxwick Chronicles and The Fate Challenges. Reborn is her debut novel. She is a member of the Virginia Writers Club, Valley Writers, and Untethered Realms. For more information, please visit her website at http://cheriereich.wix.com/author.

Catherine Stine’s fiction spans the range from contemporary to dark fantasy to sci-fi. Her futuristic companion thrillers Fireseed One and Ruby’s Fire are Amazon bestsellers and indie award-winners. Dorianna, her YA paranormal won Best Horror Novel in the Kindle Hub Awards. Her work is included in the boxed sets Future Tense and Secret Worlds as well as in the Untethered Realms anthologies Twisted Earths, Mayhem in the Air and Fantasy Uprising. In addition, Catherine writes new adult fiction as Kitsy Clare. She suspects her love of dark fantasy came from her father reading Edgar Allen Poe to her when she was a child. She teaches creative writing workshops and is a member of SFWA, RWA and SCBWI. Visit her at http://catherinestine.com/wp/

The authors will be awarding a $40 Amazon or B/N GC to a randomly drawn winner via rafflecopter during the tour.