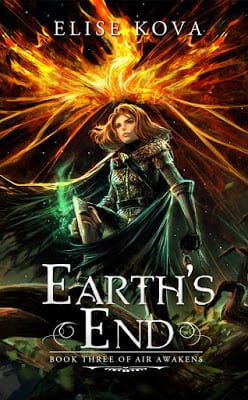 A woman awoken in air, a soldier forged by fire, a weapon risen from blood.

Vhalla Yarl has made it to the warfront in the North. Forged by blood and fire, she has steeled her heart for the final battle of the Solaris Empire’s conquest. The choices before Vhalla are no longer servitude or freedom, they are servitude or death. The stakes have never been higher as the Emperor maintains his iron grip on her fate, holding everything Vhalla still has left to lose in the balance.

Vhalla snapped the reins and dug her heels into Baston’s sides, forcing him into an all-out run. From above, she heard the shouts of her waking enemy.

Thick and melodic calls erupted in the night, a language completely foreign to Vhalla’s ears. She didn’t have to know the words to know they weren’t friendly, so Vhalla pushed harder, pressing herself to Baston. Vhalla took a breath as she heard arrows being knocked overhead.

The sound of bowstrings being drawn in mass made gooseflesh dot her arms. Another shout, a single word and arrows cut through the air, determined to rain death around her. Even if Vhalla was certain her chainmail would shield her, the horse was completely unarmored; if Baston died, she was as good as dead. Vhalla twisted in her saddle, sweeping a hand through the air. The curtain of wind sent the arrows scattering harmlessly.

They shouted in protest, angst-ridden that she continued on unscathed.

The second assault came faster and hastened Vhalla’s mounting frustration. She had to be out of their range soon. More lights began to blaze above and behind her, casting the ground below in a faint glow. The light illuminated the edge of the city, and Vhalla was forced to stake her life on the hope that once she was out they wouldn’t catch her.

The arrows soared through the air once more and Vhalla twisted, knocking them away in mass. She expected to hear a cry for a third assault, but instead what she heard was even more disheartening. Two words that someone said in a thick Southern Common.

She became their prey. The sound of thundering hooves came from the direction of where the city first began.

Vhalla crossed under the edge of the city, plunging into the welcoming darkness. Had it been a day ago, Vhalla would not have given those riders a moment’s worry. Baston would outrun any normal horse, plus with her wind he was faster than thunder across the sky. But Baston had been ridden hard with only a brief rest.

Vhalla shifted her vision and peered over her shoulder. In the distance she saw them, riding relentlessly after her.

Sweating, panting, clutching the reins with white knuckles, Vhalla pushed all her energy into the wind at Baston’s and her back. More—they both had to give more. In her blind determination she almost missed the whiz of an arrow through the air.

Vhalla thrust out her arm and stopped the arrow midflight. She closed her fist and threw her arm backwards. The arrow turned and sped back at its original owner. Vhalla watched it soar straight into the Northerner’s eye, the one she pointed a finger at. The man slumped, and then fell off his saddle. She swallowed hard, looking away as the others’ cries grew louder. 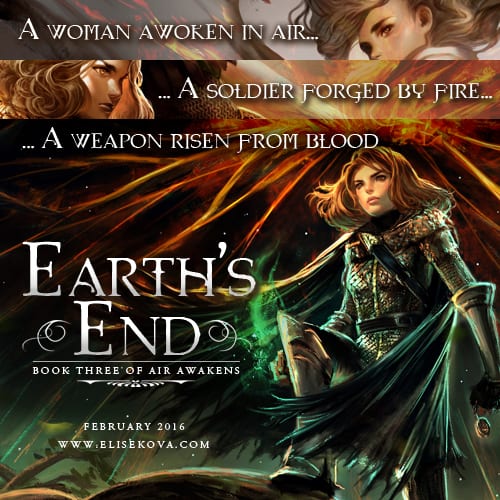 Eyes, she would always go for the eyes. Whether someone was or wasn’t a Groundbreaker with stone-like skin was a risk she couldn’t take; she wouldn’t have many shots. Another archer held his bow, waiting for a different opportunity to take his chance.

Baston was already breathing heavy, and Vhalla knew she had to get them off her tail. The four riders behind her rode on fresh mounts and had the advantage of their night’s worth of sleep. Vhalla turned and pointed a finger. Sweeping her hand upward, an arrow freed itself from the other archer’s quiver. With a twist of her wrist, and the keen focus of a killer, Vhalla sent it into the unsuspecting Northerner’s eye.

One of the remaining two riders fell away as they swerved through the trees, his companion pushing forward. As the man swung wide, Vhalla realized they were trying to flank her. Vhalla grabbed for the dagger strapped to her wrist, sending it straight for his eye.

In the process, the woman rider had caught up with Baston, raising a wickedly curved blade toward his haunches. Vhalla threw out her other arm, sending the rider toppling head over heels. It wasn’t chance that the assailant’s blade slit her wielder’s throat in the fall.

Vhalla held out an expectant palm, her own dagger returning to it after a moment.

Wiping the blood on her thigh, she quickly sheathed it against her wrist before grabbing the reins once more. Vhalla swallowed a cry for speed; shouting at the horse would not make it go faster. It would only further compromise her position.

Vhalla pressed her lips together, forcing herself to keep her composure. It was not the first person she had killed. She had killed on the Night of Fire and Wind, she had killed the man who had murdered Larel, and she had killed with her bare hands at the Pass.

What had sunk deep into her bones was the acceptance of what she must do. It was knowing she had become a killer. It was how easy it was for her to slay her foes without even thinking of each of them as a whole person that showed Vhalla she’d gone far down a path she’d never wanted. They were entities, enemies, barriers, but they weren’t human.

Distracted by her inner conflict, Vhalla was caught completely off-guard by the first assault coming from the trees. A Groundbreaker swung down from the air, bringing his sword against the back of her head. Vhalla attempted to dodge at the last second, but it was too late. The blade slipped off her chainmail but it left her vision blurred and her ears ringing.

She blinked, trying to sort her senses as she pushed Baston onward, putting the assailant behind them. Groundbreakers jumped from limb to limb in the trees above her—free and fearless. Vines came to life to meet their extended hands, allowing them to soar through the air. With a twist or a tug, their lifeline shrunk back, curling around branches to pull them upward.

She wanted to feel amazed; perhaps she would have, if these people weren’t out to kill her. Another swung low, and Vhalla dropped off to the side of the saddle to dodge. Righting herself, Vhalla redrew her dagger in one quick motion as a third swung forward to attack. She sent the blade soaring through the vine the Groundbreaker held.

The man fell through the sky; Vhalla’s mind betrayed her, showing a different body plummeting through the air.

With a growl, she turned her blade to the next Northerner she saw, relying on the same tactic. She would show them why one did not hang above the head of the Windwalker. The other body fell with a sickening thud, and Vhalla left them behind her. With a twitch of her wrist, her blade returned to her hand.

Baston’s pace had slowed, and Vhalla snapped his reins again. This was the first time the beast did not heed her command, and she felt uneasiness settle across her.

Five Northerners still jumped from tree to tree overhead as dawn began to fade into early morning. Vhalla wondered if they were biding their time for rider and mount to tire. If she were they, she’d do the same thing. Baston’s sides heaved with exhaustion.

Their presence began to wear on Vhalla, and she watched them with bated breath, waiting for the next assault. Another hour passed and Baston slowed to a trot; she expected this to be the moment they attacked. But the Northerners held fast, following from welcoming branch to welcoming branch, each bent to meet their feet and hands.

They were toying with her, like cats with a mouse. 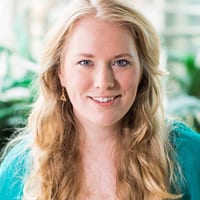 Elise Kova has always had a passion for storytelling. She wrote her first novella, a high-fantasy, in sixth grade. Over the years she’s honed her love of literature with everything from fantasy to romance, science fiction to mystery, and whatever else catches her eye.

Elise lives in Saint Petersburg, Florida, where she’s currently working on the next installment in her debut YA fantasy series: Air Awakens. She enjoys video games, anime, table-top role playing games, and many other forms of “geekdom.” She loves talking with fans on Twitter (@EliseKova) and Facebook (/AuthorEliseKova). Visit her website, EliseKova.com/, for news and extras about her books!