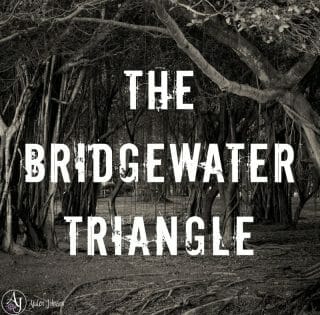 I heard about the Bermuda Triangle. Didn’t know there was a Bridgewater Triangle. I learned about it from a documentary on Amazon. I find places like these fascinating. Something is….up with these areas but people don’t know why. I neither believe nor disbelieve the stories. I like that there are still things we don’t know. They’re all just interesting stories to me.

The Bridgewater Triangle refers to an area within southeastern Massachusetts. The towns Abington, Freetown and Rehoboth are at its angles. Supposedly, this is a paranormal hot spot. It’s said to be the most haunted place in the world. People have reported strange activity in the area– Bigfoot sightings, Native American ghosts, UFOs, unmarked black helicopters, satanic rituals, strange disappearances and cattle mutilation. In 1980, a police sergeant said he spotted a six-foot tall winged creature, the Thunderbird, while driving late at night.

Bigfoot Sightings
In 1970, reports of a 7-foot tall hairy monster and its footprints drove both the Bridgewater and Massachusetts State Police canine unit to conduct a search for a bear. However, neither man nor bear was ever found.
Dighton Rock

Some unknown group of people carved human figures, animals and symbols into the flat side of large boulder called Dighton Rock. Experts have debated the marking’s origins for centuries. Theories give credit to ancient Native Americans, Phoenicians, Norse, colonial Portuguese, and even Chinese sailors. No one knows for sure who carved the markings.

Profile Rock, also known as Joshua’s Mountain, is named so because it looks like the profile of a face. According to Wampanoag legend, the rock takes the image of Wampanoag Chief Massasoit Sachem. To them, this rock is sacred. Over the years, it has been associated with a variety of ghostly phenomena such as strange glowing, disembodied voices, orbs of light and sinister apparitions.
The Hockomock Swamp
The Hockomock Swamp is a 5000+ acre area that lies within the western section of Bridgewater Triangle. The Wampanoag people called it “the place where spirits dwell.” The swamp is known as the center of the paranormal activity. Many Bigfoot, Thunderbird, monster snake and other creatures have been seen in the area. Many believe that these creatures live in the swamp.

This is only a small sample of the strange happenings that have been reported in the Bridgewater Triangle.