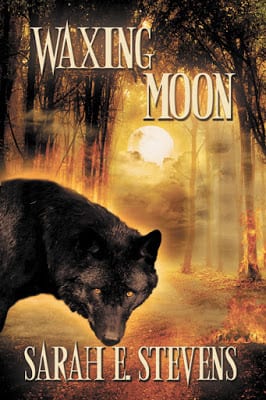 Julie Hall thinks she has the hang of mothering her Werewolf baby Carson, until the night she wakes to frantic barking and finds her house on fire. Arson. Paranormal fire creatures want to kill Carson—and an unknown Were may be helping them.

As if fire-spawning Salamanders and a mysterious Werewolf aren’t dangerous enough, Julie soon faces even closer threats. Her trusted friend Eliza harbors a secret and Julie’s new understanding of Werewolves threatens to tear apart her team. Meanwhile, her relentless enemies will burn everything in their path, if they can’t get to Carson.


Will Julie’s efforts to protect Carson do more harm than good?
Amazon |The Wild Rose Press
Dark Moon Wolf
Book One of Calling the Moon
Available on Amazon

“Your house was burned down by Salamanders.”

The words didn’t match his tone.

This time, I heard the capital letter, but remained bewildered.

“What the hell are you talking about? Salamanders? Like, lizards?”

Tim’s face registered surprise. “Sheila?” “I know what they are.” Sheila’s voice shook.

“Great. So glad you’re both part of the in crowd. Since my house burned down and my life nearly ended, do you think one of you could please enlighten me?”

“Dammit, Jules.” My sarcasm seemed to revive my best friend. “Could you drop the attitude for a while? Yes, shock and trauma and all of that, but you’re being a total jerk. Tim’s just trying to help.”

I meant to yell back, but the frustration on her face stopped me. I tried to give her a grin, instead. It probably looked like a grimace, but I gave my best shot.

“God, Sheila. Attitude is the only thing keeping me going right now.”

“We should be. I’ll know if they’re around.”

Tim said, “Salamanders are paranormal creatures, like Werewolves. They draw their strength from the sun and can call on its powers—fire, heat, light—similar to the way Weres draw on the moon to raise water, shift darkness, and such. Judging by the scents at the scene, at least three salamanders called fire at your house. Not an accident, Julie. Arson. Someone—a group of someones—wanted you and Carson dead.”


Me, I couldn’t even form the word. Dammit, I should have taken a shower and gone to bed and dealt with all of this later. Sheila had been right. As usual.

“I know Salamanders are…antithetical to Weres, but I thought you mostly co-existed peacefully.”


“So these people turn into giant lizards? Instead of wolves?” I asked, not understanding why Sheila stifled a small laugh at my question.

Tim said, “No, they don’t change form. Sometimes when calling the sun, Salamanders have a different cast to their eyes or their complexion—minor changes—but they remain fully human in shape.”

“Then why are they called Salamanders? If they’re not lizards?”

Tim frowned, then finally crossed the room to stand beside Sheila’s chair. When he rested his hands on her shoulders, tension visibly drained from his body. Sheila unconsciously leaned back against him and his thumbs traced circles on her white t-shirt. They were physically opposite in so many ways, with Sheila’s striking looks and Tim’s extra-in-a-crowd-scene appearance; Sheila’s long blonde hair and smooth tan, Tim’s closely shorn black curls and dark brown skin. Yet, there was an undeniable sense of rightness between them. I’d even stopped teasing Sheila about Tim being just another in her long line of throwaway men.

I realized my hands still shook and I clasped them together to hide the tremors. As Tim spoke, I forced everything else out of my mind to focus.

“You’d have to ask a Salamander for a full version of their history, but as I understand it, they believe they’re descended from a powerful sun-being, a lizard creature from the sun that came to Earth and mated with a human long ago.”

Sheila looked up at Tim. “Really? I always thought they were called Salamanders because people used to think salamanders—the real ones—lived in fire.”

“Why would people think salamanders lived in fire? Aren’t they amphibians?” I asked.

“Because salamanders lived in rotten logs and crawled out when the logs were thrown into a fireplace.”

“Well, both explanations sound equally bizarre to me,” I said.

“I don’t care how they got their name,” said Sheila. “Why are they trying to kill Julie and Carson?” 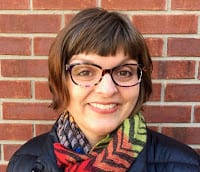 Sarah’s love of reading, writing, and all things fantasy started with her childhood explorations of Narnia, Middle Earth, and Pern. She’s a huge enthusiast of all fantasy, paranormal, and science fiction. She’s a board game geek, an artist, and a dabbler in making chainmaille jewelry. She loves to write about strong women and their friendships–combined with magic and love, of course.