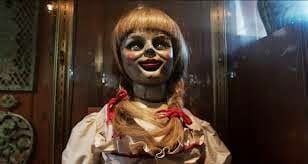 A while ago, I read the possessed doll from The Conjuring was getting her own movie. And I went bananas. The Conjuring is one of the best horror movies that’s come out in years. Annabelle is creep, like so creepy you wonder about the sanity of  those who owned her. We haven’t had a killer doll movie since, what, Dead Silence. I think we’re due. I hadn’t heard anything else about the movie since the announcement. Yesterday, they released a trailer. It’s awesome!

Why in the world would that women put a doll that disturbing in a child’s room?

Fun fact. Annabelle is a real doll. I mean, The Conjuring is based on a true story.

Annabelle was just your run of the mill Raggedy Ann doll.

Donna got Annabelle from her mother in 1970. Donna was a college student at the time, and living with a roommate named Angie, and at first neither thought the doll was anything special.

One night, Donna returned home to find Annabelle in her bed, with blood on her hands. The blood – or some sort of red liquid – seemed to be coming from the doll itself. Donna finally agreed to bring in a medium. The sensitive sat with the doll and told the girls that long before their apartment complex had been built, there had been a field on that property. A seven year old girl named Annabelle Higgins had been found dead in that field. Her spirit remained, and when the doll came into the house the girl latched on to it. She found Donna and Angie to be trustworthy. She just wanted to stay with them. She wanted to be safe with them.

Being sweet, nurturing types – they were both nursing students – Donna and Angie agreed to let Annabelle stay with them. And that’s when all hell broke loose. Read more here