I was so looking forward to this post. I’ve been writing it in my head for a week.

Chains of the Sciell book trailer took longer than expected. You know when you reach a point in your story when you’re only changing small things? That’s what happened with this trailer. I was at the end.

The nerves were kicking in and I was changing things that didn’t need to be changed. I watched it a million times and lost the ability to see it as an outsider. I just needed to get it out there.

I talked about my views on book trailers in the post Are Book Trailers Effective? They’re hard to get right. They take a lot of work. I do trailers mostly because they’re fun. People love sharing videos and photos across social media. A trailer is a way to build buzz.

I create mine in Adobe After Effects and Photoshop. Since I’m a “struggling artist,” I reused the audio and a few videos from the trailer for Book 1 The Sciell.

I use stock videos instead of photos just for fun. Stock videos can cost between $50 and $80. A trailer could have four of them sown together.

Stock photos and videos come in different sizes from small to huge. The smaller videos are reasonably priced. But, unless I’m buying just for my blog, I always go with a large file.

It’s easier to make a large file smaller than a small file larger.


I highly recommend you make your book trailer in HD.


Most people interact with content through a mobile device, which all play videos in HD. Depending on your audience, they will expect the video to be in HD. It looks so much better than standard definition.

To take you behind the scenes of the Chains of the Sciell trailer, I need to start at the beginning. I got the videos and audio from 123rf and iStock.

You can test drive images and videos. Shutterstock lets you download comp version of the files. They’ll be watermarked. You can put them in your trailer to see if they fit before you buy them.

The Sciell was my first adventure into Adobe After Effects. I went into that beast thinking I could just figure it out. Then, I saw this:

And hit a mean reverse. Didn’t even know where to start. It was just too much. So far, of all the Adobe products I’ve played with, After Effects is the most intimidating. I went to Adobe TV and followed along with a beginner’s tutorial. 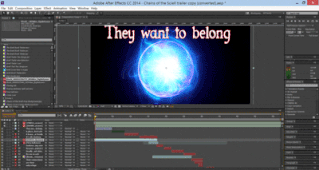 Putting those two songs together took forever. It was me sitting in front of my computer listening, over and over, to the merged version with my eyes closed until I found an arrangement I liked.
You don’t have to use just one song for your trailer.
I kept that combination for Chains of the Sciell. I love those songs so much. Since the trailer is about Book 2, I wanted to make it feel like it’s a part of a trailer series. That’s the other reason I recycled the audio and some of the videos.
Now, I need words.
How do you come up with the words for your trailer?
I have the most fun playing with transitions- making one video blend into another, using the audio to set the tone for how the words flow in and out. However, use any effects in moderation. Any video creator will have a ton of transition option. Do not have a different transition/effect for each video/photo. That’s too much. Pick one as your base and include a couple to add emphasis at certain points.
Do not go overboard with the effects. It will get irritating.

The first trailer had this rolling darkness.

Which is perfect for Chains of the Sciell. But, it’s too washed out for me. I needed it to be dynamic. Then, I remembered Photoshop can edit videos!
For fun, I made it red!

The words were done. The video were in order. Now, here for the tweaking. Most of my work on this trailer came from tweaking smaller things. I mentioned in the post Creating Image Quotes how, when making image quotes, I rarely use one font. I applied that to the Chains of the Sciell trailer. I played with different font pairings. Also, the words were on one line so I played with arrangements.
Play around with fonts and word placement, but don’t go overboard.
These two are my favorites.

Trailer finished. Had my betaviewers watch it and give me feedback. They enjoyed it. One suggested I add people, which was an awesome suggestion and something I should’ve thought of. My series is character focused.
Finding a stock video with a person that fit with my book was impossible. I searched 123rf, iStock and Shutterstock. I couldn’t find anything. It was frustrating.
Somehow, I came across stock photos of women in fire. I loved them. Except, the women were naked or barely covered. All of them. It’s ridiculous. The images were perfect, but I don’t want boobs in my trailer.
Then I found this. 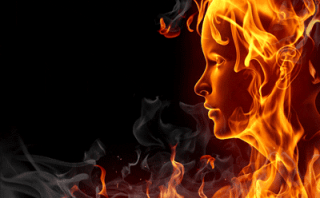 It is so beautiful. Although it’s a female, I don’t think it’s so feminine that men would be turned off by it.
This trailer made me walk outside my own little box to incorporate images. I put fire under the image so it looks like it’s moving.
Try overlapping images and videos, so the image looks like it’s moving.
Another betaviewer suggested I add a voice over. Since I have Adobe Audition, I tried it. As I started the adventure, I realized if I wanted to add my voice, I should’ve done that at the beginning of the project. Adding my voice was a whole different beast that I was not prepared for. I’ll play with it more for the next trailer.
Think of adding your voice to the trailer. Instead of just words and music.

Darkness is growing up. Now, the It has new masters and they’re starving.

How can they draw the power they need to survive? Their Lifeblood evolves. They can now see auras. Connections only existed between two beings. Now, these family bonds form between most Sciell. They can feel the other’s need no matter the distance. If one is angry, the other becomes infected with that same rage. They always have someone else in their heads. They share power.

Divine Mathews, Josephine Royal, Blea and Aliceanna Carlton’s connections told them they weren’t alone. The connections felt like home. These four know they’re different. They can do things…see things. They don’t know why.

They become trapped inside Midnight Prysn- a twisted mansion created to keep them weak. Divine, Royal, Blae and Aliceanna finally meet those they’re connected to. Only, they feel like they’ve met before.

As Midnight Prysn’s new residents regain their memories, they realize these connections aren’t just a source of comfort. They can be chains.