Since this one appears a lot in anime, I figured it must have some root in Japanese mythology. 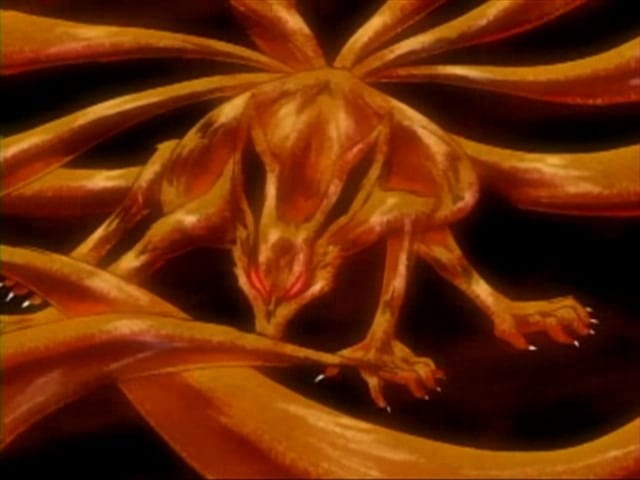 There are different nine-tailed foxes with different stories. For this post, I’ll focus on the Kumiho.

A fox that lives a thousand years turns into a Kumiho- like its Japanese and Chinese counterparts the kitsune and the huli jing. Also known as gumiho, Kumiho is a creature that appears in the oral tales and legends of Korea and are similar to European fairies.  It can transform into a beautiful women and seduces men to kill and eat. Sometimes, they take the form of a bride to devour a groom after his wedding.

The current Japanese kitsune can sometimes be evil and sometimes good, but the Korean counterpart, over the years, has become a symbol of evil.  It’s not a benign trickster who delights only in fooling people. There is no doubt that the Kumiho is an evil creature- unlike the fox of Japanese folklore, who will sometimes change into a woman to marry a man who has been kind to it. The kumiho never appears as a benevolent figure. It is a demoness. Legends tell that while the Kumiho is capable transforming its appearance, there is still something persistently fox-like about it.

It is unclear at which point in time Koreans began viewing the Kumiho as a purely evil creature, since many of the ancient texts mention benevolent Kumihos assisting humans. In fact, many of the older texts make more frequent mention of wicked humans tricking kind but naive Kumihos.
As the mythology of the Kumiho evolved, it was later believed that the creature had to consume human hearts in order to survive. Another version of the mythology, however, holds that with enough will, a Kumiho could become fully, permanently human and lose its evil character.
Source:
Mythical Creature List: Kumiho
Kumiho: The Nine-Tailed Fox
Encyclopedia Mythica: Kumiho
Wiki Fur- Kumiho
Categories:
Tags: dark fantasyfantasykimihomythical creaturesworld building

🙂 Has to be one of favorite creatures.

I love mythology, especially from foreign lands. My favorite folklore character is Baba Yaga, of Slavic folklore. You should check it out!

Thanks for the suggestion. I'll check it out. I want to stick with mythical creatures from foreign lands. They're fascinating 😉

I haven't heard of this before… very different, Auden!